Congratulations to all the CCV team members who helped organize this important environmental justice event, including Luis Olmedo and Humberto Lugo. 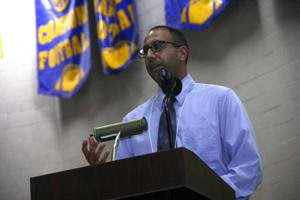 BY WILLIAM ROLLER, Staff Writer ivpressonline.com
BRAWLEY — The environmental summit here has brought disadvantaged populations greater opportunity to self-determine safety guidelines for their own community.
The sixth annual Imperial Valley Environmental Health Leadership Summit was hosted by Brawley Union High School on Saturday. BUHS recently accepted installation of a community air monitor that detects particulates that may harm health.
Executive Director of Comite Civico Del Valle Luis Olmedo said his work aims to bring critical information so working people can fully participate in implementing environmental protections geared to maintain everybody’s health. “What sets this summit apart is the collaboration with Brawley High School and the willingness to give teachers and students valuable information that will support environmental and health leadership locally,” he said.
At the school gymnasium Gala King explained the importance of air monitors. King, the health surveillance director for California Environmental Health Tracking Program, noted Imperial County has many stressors that trigger disease such as asthma. But with air monitors residents can hold offenders accountable. The county already installed 17 monitors, and has plans four more in coming months and add 20 next year.
At the same workshop, Shrayas Jatkar told the audience how IVAN (Identifying Violations Affecting Neighborhoods) can report violations of polluters. Jatkar, policy associate with Coalition for Clean Air in Sacramento, called IVAN a Web-based neighborhood police watch. Residents armed with just a video camera can now document pesticide drift, agriculture burning, oil or gas operation venting. And with IVAN, rather than just reporting possible violations there is a closed loop of communication between citizens and agency regulators. It is a tool that already has proven itself valuable. During 2010, heavy rains in Calexico led to flooding and polluted runoff from abandoned feedlots near the New River that was reported by a neighbor using IVAN, Jatkar noted.
Onyx Bazulto is an Imperial County community health worker. Bazulto explained, because the community is in a desert, where it is hot during the day, cold at night, dry, with significant fertilizer and pesticide application — these factors all contribute to air pollution and can trigger asthma.
Residents need to use safe nontoxic household cleansers and products, Bazulto urged. It is advantageous to have tiled floors instead of carpets because carpets can collect dust mites and mold. People can learn more about air quality alerts at the Web page: www.imperialvalleyair.org, she said.
Alejandro Vasquez, another county health worker, called the summit a great way to network with agencies that provided stacks of brochures. These offer references for low-income residents on how to access health programs. Even the summit reached out by offering free flu shots Saturday.
Workshop presenters had much praise for students sacrificing a beautiful weekend to learn about the environmental/health connection. One attendee, Frances Nicklen, is a student at Southwest High School. Nicklen is active in the organization LEAP (Leaders for Environmental Awareness and Protection). She participated earlier this year in outreach to Brawley residents, obtaining permission to place air monitors. “It felt like doing something concrete — not just talking, but action,” she said.
Opinions expressed in this blog are those of the author, and do not necessarily represent the positions of the Moving Forward Network or its members. All errors are the responsibility of the author.