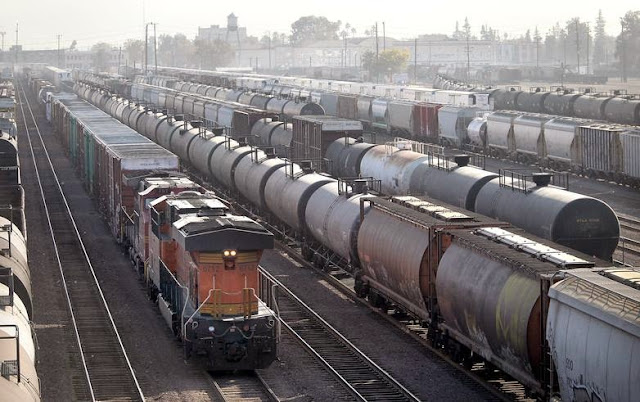 The BNSF railroad has been working to double-track its transcontinental rail line for several years, and by the end of 2015 will be almost done. BNSF is doing this in order to generate more business – especially in transportation of containers of Chinese imports from the Ports of Los Angeles and Long Beach to inland cities – and make more money. The Bloomberg news article Buffett Builds Rail Superhighway to Grab Truck Freight provides more details on BNSF plans and progress.

While a casual reader might conclude that more freight will reach its destination by rail and that trucking volumes will be reduced, that is not true. Most containers will be transported by rail only as far as huge intermodal hubs in the Kansas City, Memphis, Chicago, Dallas, and a few other metropolitan areas, from where it will trucked as far as 500 miles to its final destination.

Additionally, double tracking will increase the capacity of the rail network, so is likely to generate more Chinese imports, more train trips to the intermodal hubs, and more truck trips to distant cities.

For the unfortunate cities in which these intermodal yards are located, these ‘improvements’ will mean more freight train traffic, more freight truck trips in and through the metropolitan areas, more traffic congestion, and higher costs for highway maintenance and construction.

Tragically, because of the concentration of locomotive, trucks and warehouses around intermodal yards, more profits for BNSF will also mean more dangerous diesel exhaust air pollution, more cardiovascular and other diseases, including cancer for their neighbors in nearby communities, and more premature deaths.

This is completely preventable.  For example, modern Tier 4 locomotives emit much less pollution than the old dirty locomotives BNSF chooses to use in its rail yards, and even cleaner electric locomotives could be used.  While most intermodal trucking is done using old highly polluting trucks, BNSF could require that only much cleaner late-model diesel trucks or even natural gas trucks haul freight from all of their rail yards, as they promised to do for a California rail yard.

In all but a few cases where they were forced to do so, the BNSF has not voluntarily taken significant actions to protect their neighbors, but the EPA could require them to do it. Under the Clean Air Act, the EPA has the authority to regulate ports and rail yards, as they do other high polluting facilities like petrochemical plants and power plants.

Please help clean up these dirty rail yards by signing our petition today.

Tell Gina McCarthy and the EPA
ZERO deadly diesel emissions now!
Opinions expressed in this blog are those of the author, and do not necessarily represent the positions of the Moving Forward Network or its members. All errors are the responsibility of the author.