More Inland Ports Planned – Is Your State on the List? 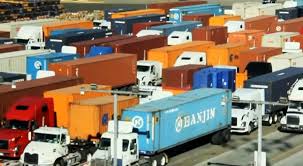 Inland ports are heating up.  Expansions or new inland ports are in the works in states across the country, including Florida, Indiana, Illinois, Iowa, Georgia, Minnesota, Missouri, South Carolina, Texas,Virginia, Wisconsin, and elsewhere.

Community and environmental groups are wise to stay on top of plans in their state, so they can get involved quickly when new facilities are proposed.

As the Progressive Railroading article below says, “At the end of the day, freight finds the path of least resistance.”  As the history of Environmental Justice shows, organized communities can force decisionmakers to make these facilities less polluting.

A few recent news stories are below:

“We have to stay ahead of the curve,” says Frank Papa, sales manager for America’s Central Port, the St. Louis region’s only full-service, public intermodal port, which is in the midst of its $50 million South Harbor project that includes adding two rail loops to an existing 9,600-foot-long loop that will connect to the new harbor and provide access for six North American Class I carriers. “The completion of that second harbor is going to have a major impact, especially here in the Midwest.”

“The Wylie, Texas, terminal, which cost more than $64 million, increases the Kansas City, Missouri-based railroad’s capacity for domestic as well as growing cross-border shipments to and from Mexico, where it owns a railroad”

“The success of the State Ports Authority’s inland port in Greer is encouraging the agency — and competing ports in other states — to expand or create more of the distribution centers that move cargo between the coast and intermodal hubs hundreds of miles away.”

Asked about increased truck traffic that the inland port will bring to Murray County, Pittman said, “All the due diligence has been done.”