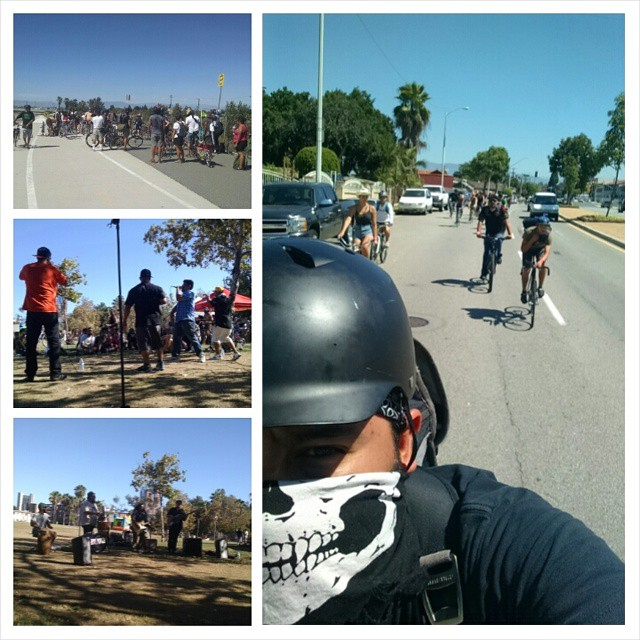 96 degree temperatures did not stop 100+ members and friends of East Yard Communities for Environmental justice from having a great ride, viewing toxic and hazardous sites adjacent to homes and communities, discussing their negative health and quality of life impacts, and talking about how they can get involved in making a difference.

The ride started at the East LA Civic Center, with supporters joining along the way in Bell Gardens, Maywood, Bell, Lynwood, Paramount and Long Beach! They toured the LA River, Sleepy Lagoon, 710 Freeway (formerly known as the Los Angeles River Freeway), and rail yards, and discussed the historical significance to communities of color. The group also visited locations highlighting the improvements that have been made and what the community could look like if they continue to push with community voice and participation.

Reclaiming the LA River Photo and Film Exhibit
Saturday, September 26
Meet in Commerce or Bell Gardens at 6 PM (addresses below)
Learn the secret location of the art exhibit, and ride out at 6:30

EYCEJ youth will exhibit photographs and films focusing on reclaiming the dignity and respect of the LA river for the South LA river communities. Films and a photo exhibit will demonstrate the history of the LA River to all communities living alongside the LA River as well as the potential we see in the LA River. All films and photography will be original work from EYCEJ Youth summer program and for the communities of South East LA. Films will also be used as a public comment tool to push forward in supporting CommunityAlternative7 for the 710 Freeway project.

To join the fun, Sign up at Reclaiming the LA River and meet up at 6 pm at East Yard Communities for Environmental Justice, 2317 Atlantic Boulevard in Commerce OR Bell Gardens High School, 6119 Agra Street in Bell Gardens.