The battle over the proposed coal terminal in Oakland is a story of insider opportunism, broken promises, community outrage, grass roots leadership, and responsive political leaders.

Key players include a powerful developer, a former port director and former port commissioner on opposite sides of the battle, the city council, a Utah coal company, MFN members Earthjustice and West Oakland Environmental Indicators Project, numerous other environmental and community organizations, including the Sierra Club, and angry citizens. 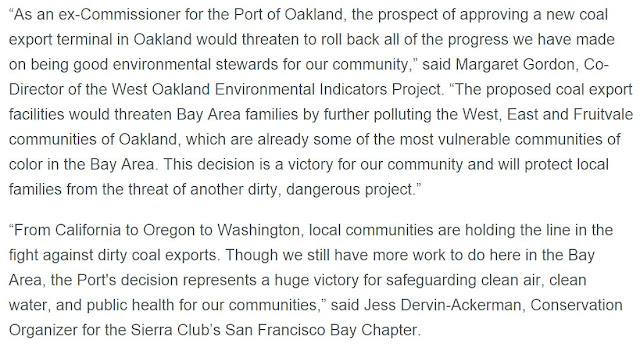 The final chapter has not been written, but public hearings and city council meetings are being scheduled, and I am optimistic this project can be stopped.  Stay tuned!

OP-ED: Shipping Coal Through Oakland, “Yet Another Attempt to Exploit My Community”, by Margaret Gordon, PostNews Group

Public Will Weigh In On Bringing Millions Of Tons Of Coal To Bay Area, CBS