Rumor – Within days, EPA to release standards increasing fuel economy for heavy duty trucks as much as 40%

Rumors are flying that the EPA will release aggressive new fuel standards for heavy duty semi-trailer trucks and other commercial vehicles within the few days. 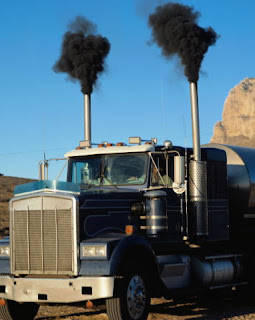 This initiative was announced in 2014, in Kicking Vehicle Efficiency into High Gear, and the Obama administration has been working on developing the rules since then.  Perhaps because of this effort, this initiative, unlike most other Administration environmental proposals, has few opponents.  It is strongly backed by both environmental groups and the trucking industry, which has not seen significant increases in fuel efficiency for decades.

These standards will raise the bar from big rig fuel standards issued in 2011, which require fuel consumption reductions of up to 20 percent by 2018.

Inside sources say that the rule will require increases in fuel economy of 40 percent or more by 2025 or 2027 – a move that would very likely drive a dramatic reduction in diesel exhaust air pollution.

A story published Monday in the National Journal has an interesting political analysis – This Industry Is About to Get Regulated by The EPA. Why Isn’t Anyone Mad?