For the first time — and perhaps one of the only times — Pembina Marine Terminals’ controversial plan to build a $500 million propane export terminal in North Portland was subjected Tuesday afternoon to open public debate.

In a packed hearing room, Portland’s Planning and Sustainability Commission heard four hours of contentious testimony on the project.
The hearing was called to consider a narrow but necessary zoning change for the project to move forward. But it became a forum for neighbors, environmentalists and community groups to air their gripes with the public process on what could be the largest infrastructure investment in Portland history – a public process many contend has been inadequate.
The zoning amendment would allow the use of a pipeline to transport propane from onshore storage tanks onto ships at a nearby dock. Code currently doesn’t allow the pipe across a narrow strip of shoreline at the Port of Portland’s Terminal 6 facility in St. Johns, which is zoned for conservation.
The zoning snag, discovered just as Pembina was announcing the facility in September, has the potential to derail the project, although staff at the Bureau of Planning and Sustainability have recommended the commission make the change to accommodate it.  They cite economic and social benefits in terms of jobs, personal income and tax revenue; the ability to manage and mitigate public safety and environmental risks to “acceptable levels”; and their determination that the global economic consequences were “inclusive.” 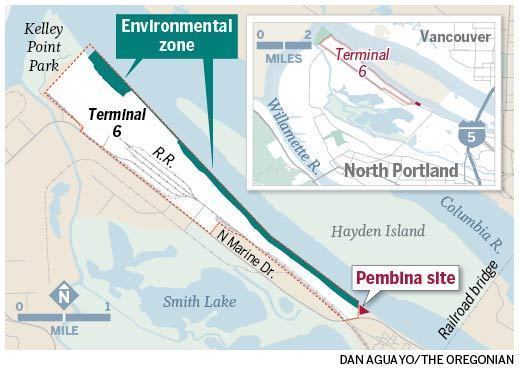 Commissioners heard first from project backers Tuesday. Pembina General Counsel Harry Andersen called the project “an economic and environmental win” for the City of Portland.
Earning guffaws from some in the crowd, Andersen repeatedly called propane a “clean fuel” derived from natural gas that would be used as a transition fuel to displace the burning of heavier fossil fuels in Asia. He emphasized community benefits from the project, including 30 to 40 permanent jobs at the terminal with annual pay between $70,000 and $120,000, 600 to 800 construction jobs and property tax revenues that could bring Portland $12 million in new revenues a year.
He said the facility would be built to withstand a magnitude 7 earthquake in the City of Portland and a magnitude 9 trembler on the coast. Pembina, he said, has an excellent track record of safety for the last 15 years and would use state-of-the-art equipment and systems in Portland to prevent accidents.
Pembina also announced a number of community commitments at the meeting, including a pledge to hire locally, use union labor during construction, restore habitat at the site and use renewable energy to offset the terminal’s electricity use.
Pembina was supported by Curtis Robinhold, the Port of Portland’s deputy executive director, who called the project “a great match for our community.
“After rejecting coal exports and oil by rail, we are confident we found the right partner at the right time,” Robinhold said. “I have full confidence in Pembina.”
Neighbors and environmental groups said they didn’t have the same level of confidence in the company or the city’s due diligence on the project. They said Pembina has had months to respond to community concerns on local and global greenhouse emissions impacts, on potential blast zones around the terminal and on the safety of transporting massive amounts of energy through Portland neighborhoods by rail.
They said the company hasn’t been forthcoming with detailed information, that it has offered only a superficial and potentially inflated analysis of job prospects and that it offered little in the way of information on health impacts.
Likewise, they said the city’s analysis of the economic and social impacts has been perfunctory and rushed, and that the Pembina terminal is a poor use of valuable industrial lands to generate only 30 or 40 direct jobs.
— Ted Sickinger
tsickinger@oregonian.com
@tedsickinger; 503-221-8505
Opinions expressed in this blog are those of the author, and do not necessarily represent the positions of the Moving Forward Network or its members. All errors are the responsibility of the author.