Source: Reuters
The first of thirteen proposed but unapproved LNG export projects has been cancelled.  Others are likely to follow, affecting plans at US ports on both east and west coasts.

For a very interesting view of the American LPG export business from Russia, check out American LNG – a Failed Publicity Stunt 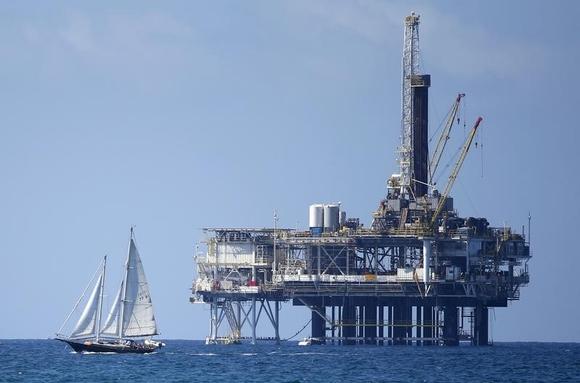 An offshore oil platform is seen in Huntington Beach, California September 28, 2014.
CREDIT: REUTERS/LUCY NICHOLSON
(REUTERS) – EXCELERATE ENERGY’S TEXAN LIQUEFIED NATURAL GAS TERMINAL PLAN HAS BECOME THE FIRST VICTIM OF AN OIL PRICE SLUMP THREATENING THE ECONOMICS OF U.S. LNG EXPORT PROJECTS.
A halving in the oil price since June has upended assumptions by developers that cheap U.S. LNG would muscle into high-value Asian energy markets, which relied on oil prices staying high to make the U.S. supply affordable.
The floating 8 million tonne per annum (mtpa) export plant moored at Lavaca Bay, Texas advanced by Houston-based Excelerate has been put on hold, according to regulatory filings obtained by Reuters.
The project was initially due to begin exports in 2018.
Excelerate’s move bodes ill for thirteen other U.S. LNG projects, which have also not signed up enough international buyers, to reach a final investment decision (FID). Only Cheniere’s Sabine Pass and Sempra’s Cameron LNG projects have hit that milestone.
Back when LNG and crude oil prices were riding high in February, Excelerate, founded by Oklahoma billionaire George Kaiser, applied for permits to build the facility.
Eleven months on, its submission to the U.S. Federal Energy Regulatory Commission on Dec. 23 said that uncertainty generated by a steep decrease in oil prices has forced it to conduct a “strategic reconsideration of the economic value of the project” and to suspend all activities until April 1, 2015.
“Due to the recent global market conditions, the company has determined that, at this time, this project no longer meets the financial criteria necessary in order for us to move forward with the capital investment,” a company spokesman told Reuters.
Stiff economic headwinds are making new developments tough going.
Prices that LNG projects can charge for long-term supply are falling from historic highs as new producers crowd the market, which is already oversupplied due to slowing demand and rising output that has seen spot Asian LNG prices halve this year.
At the same time, major consumers from Japan to South Korea and China are seeking to offload some of their long-term LNG supply commitments, contributing to the glut.
FADING DEMAND
Excelerate Energy will update the regulator on the status of Lavaca Bay in April, 2015, according to the filing.
The export plant operates under a tolling model, whereby the developer sells liquefaction capacity to LNG consumers who then must arrange for shipping to transport the fuel.
Typically companies seek to lock-in buyers for around 85 percent of a project’s capacity before reaching an investment decision.
Excelerate hints in the filing that lackluster demand for capacity was behind the suspension, saying that only “renewed interest of potential counterparties” could get it moving again.
Even before the oil price slide, U.S. LNG projects were struggling to sign up the big Asian buyers needed to underpin multi-billion dollar investments, resorting finally to tapping vestiges of demand left in Europe.
Seen in the light of plus-$100 a barrel oil, projects to liquefy and export U.S. gas by ship promised major cost savings to Asian buyers reliant on costly oil-linked gas supplied by Australia and Qatar, which generated huge demand.
The advantage of U.S. export plants was that the LNG costs would reflect local benchmark Henry Hub gas prices, currently trading around $4 per million British thermal units (mmBtu), plus shipping and liquefaction costs.
“The oil price plunge makes U.S. LNG with prices linked to Henry Hub potentially uncompetitive with LNG from other sources especially those using an oil price linkage,” independent consultant Andy Flower said.
Prior to the oil price crash, the U.S. discount to rival Brent-linked LNG supply from Qatar and Australia was around $8-$9 per mmBtu. Now those supplies represent a cost saving over U.S. projects.
“With U.S. LNG no longer looking to be the cheap LNG that off-takers have been seeking, finding companies prepared to commit to tolling fees for 20 years has become more challenging,” Flower said.
(Editing by William Hardy)
Opinions expressed in this blog are those of the author, and do not necessarily represent the positions of the Moving Forward Network or its members. All errors are the responsibility of the author.