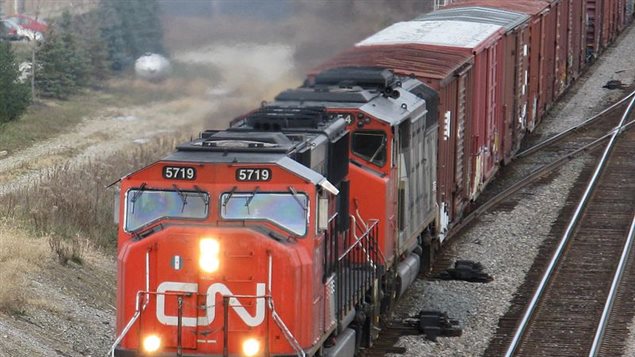 Hazy diesel exhaust fumes rise from locomotives. MOst often found in industrial and commercial applications, many light duty trucks and even cars now have diesel engines. The WHO labelled diesel exhaust a carcinogen and a new Canadian study shows diesel has an almost immediate affect on human DNA.
Photo Credit: geocam20000-wikimedia
By Marc Montgomery | english@rcinet.ca
Wednesday 14 January, 2015
In 2012 the  France-based International Agency for Research on Cancer (IARC), part of the World Health Organization said diesel engine exhaust fumes have a definite link to cancer and belong in the same potentially deadly category as asbestos, arsenic and mustard gas, according to the World Health Organisation.
Now new study by researchers at the University of British Columbia has now discovered even short exposure to diesel exhaust fumes caused genetic changes in the body.
The study was published last month in the science journal Particle and Fibre Toxicology.
It found that due to its microscopic size, the fine particulates in diesel exhaust can deposit deep in the lung. The various soluable compounds cross the lung epithelium into the blood stream and interact with organs, and through other reactions can cause damage on a cellular level.
The UBC researchers placed volunteers in a closed booth about the size of a small bathroom where they were exposed to diluted and aged diesel exhaust at levels equivalent to a Beijing higway, or perhaps a busy port, or other industrial area.
They found that even after a short period of two hours, there were fundamental changes to DNA.  They found the carbon-hydrogen coating (methylation) was affected in about 2,800 points on a persons DNA, affecting about 400 genes.  The methylation acts in silencing a gene, preventing it from producing a protein, sometimes to a person’s benefit, and sometimes not.
In the study, the researchers found than diesel exhaust exposure led to some points of methylation reduction, but in most points methylation was increased
Methylation is one of several mechanisms for controlling gene expression, which is the focus of a rapidly growing field of study called epigenetics.
“Usually when we look at the effects of air pollution, we measure things that are clinically obvious – air flow, blood pressure, heart rhythm,” said senior author Dr. Chris Carlsten, an associate professor in the Division of Respiratory Medicine. “But asthma, higher blood pressure or arrhythmia might just be the gradual accumulation of epigenetic changes. So we’ve revealed a window into how these long-term problems arise. We’re looking at changes ‘deep under the hood.’”
How these changes in gene expression translate to health is the next step for researchers. But this study shows how vulnerable our genetic machinery can be to air pollution, and that changes are taking place even if there are no obvious symptoms.
Opinions expressed in this blog are those of the author, and do not necessarily represent the positions of the Moving Forward Network or its members. All errors are the responsibility of the author.