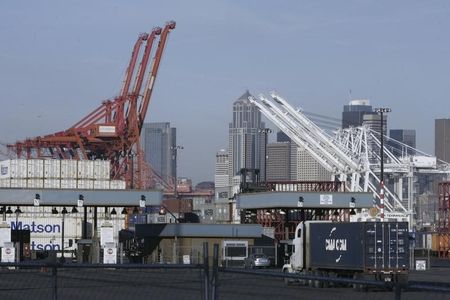 Cargo that normally takes two to three days to flow through the affected ports, accounting for nearly half of U.S. maritime trade and over 70 percent of imports from Asia, now faces lag times of up to two weeks, the National Retail Federation said.
The congestion has been most pronounced at the twin ports of Los Angeles and Long Beach, the nation’s two busiest cargo hubs, where marine officials reported 11 ships anchored on Thursday waiting for berths to open.
The number of freighters kept waiting outside the two ports has fluctuated from about eight to 18 on any given day since the slowdown began there around mid-October, said port of Los Angeles spokesman Phillip Sanfield.
Smaller backups have hit other West Coast ports, including Seattle and Tacoma in Washington state.
The slowdowns have coincided with prolonged labor talks between 20,000 dockworkers and the Pacific Maritime Association, representing terminal operators and shipping lines at 29 West Coast ports. Their latest contract expired June 30.
Management has accused the International Longshore and Warehouse Union of orchestrating some slowdowns on the docks to bolster its leverage at the bargaining table.
Union officials deny organizing protest delays but acknowledge individual dockworkers may have acted out of frustration over the pace of contract talks.
They point to other factors that port officials cite as the main reasons for gridlock. Chief among them has been a shortage of tractor-trailer chassis used for hauling cargo containers from the ports, a situation created when shippers decided to sell off their chassis to equipment-leasing companies.
Union and port officials also cite record import levels at the peak cargo season, rail service delays and the advent of super-sized container vessels delivering greater cargo volumes.
BOBBLEHEADS, YOGA WEAR AND RICE
Port slowdowns have rippled through the commercial supply chain.

Vancouver-based retailer Lululemon Athletica Inc blamed West Coast port congestion for its lower sales forecasts on Thursday. The yoga wear seller said about 1 million of its garments were stuck in port, delaying shipments to stores for up to 10 days.

Similar shipment lags were reported by Ann Inc and Ascena Retail Group Inc, parent companies of women’s apparel chains Ann Taylor and the Loft, and Lane Bryant and Justice, respectively.
Even professional sports have felt the pinch. The Oakland-based Golden State Warriors earlier this month had to hand out vouchers to 10,000 basketball fans after shipments of the team’s Sarunas Marciulionis bobblehead figures were delayed for weeks.
Exports have been squeezed as well. Among the hardest hit are Washington state apple growers, who posted a record harvest of 150 million cartons this year but have been thwarted in selling as much of their surplus as hoped to Asian markets.

Port delay-related apple losses since October have run in the tens of millions of dollars, according to Mark Powers, an executive of the Northwest Horticultural Council.

Fast-food giant McDonald’s Corp said its Japan outlets are among that country’s eateries grappling with a french-fried potato shortage blamed on port backups.
Most U.S.-processed frozen french fries bound for Japan and other Asian countries are shipped in refrigerated containers through Seattle-Tacoma, said John Toaspern, chief marketing officer for the U.S. Potato Board.
Japan is the biggest Asian market for U.S.-made frozen potato products, importing $336 million worth last year. Toaspern said port jams have at least doubled transit times for french fry shipments to Japan from two to four weeks.
Container shipments of California-grown rice bound for Japan, South Korea and Taiwan have likewise been delayed two weeks or more at the height of growers’ winter shipping season.
“You start running short on warehouse space. It’s a mess,” said Tim Johnson, head of the California Rice Commission.
Container shipments of corn and soybeans also were being held up, forcing the Illinois-based Prairie Creek Grain Company to offer some Asian customers discounts of up to 6 percent.
A roughly $700 discount per $12,000 container of soybeans is the difference between making a profit and breaking even, said Robert Briscoe, Prairie Creek president.
(Additional reporting by Karl Plume in Chicago; and Solarina Ho and Euan Rocha in Toronto; Editing by Lisa Shumaker)