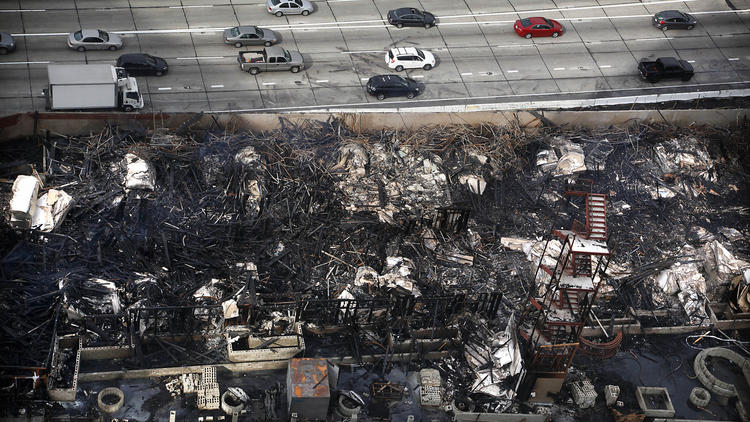 Even before half of it was destroyed in a massive blaze that lit up downtown, the Da Vinci apartment project was a subject of amazement for those who saw it.

“I just thought, ‘Who in their right minds would want to live there?’ ” she said. “Every time we drove by it, my daughter and I would joke about waving to people in the Da Vinci once it’s built. It’s like a fish tank. 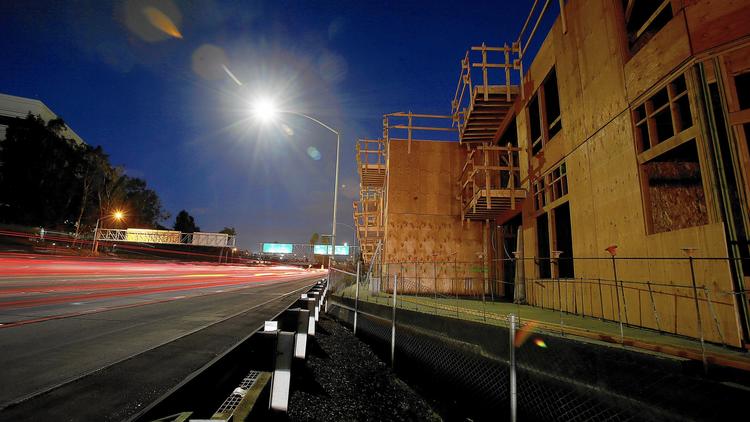 Palmer has pursued an unusual development strategy over the last decade, packing multistory apartment complexes around busy downtown freeways. Although that approach has brought thousands of new homes to the city’s core, it has triggered serious concerns among air quality experts, who fear that nearby vehicle emissions will leave Palmer’s tenants at greater risk of asthma, heart disease and other ailments.
“From a public health standpoint, there’s good reason not to build this kind of dense housing in these kinds of locations,” said professor Rob S. McConnell at USC’s Keck School of Medicine. “There’s little question that this type of development is going to increase rates of asthma. That’s what the science says.”

Palmer is far from alone. As land becomes increasingly precious and costly, developers in other parts of Southern California have been building freeway close. High-density housing, some of it separated by little but sound walls, has gone up in such locations as Boyle Heights along the 60 Freeway, Lincoln Heights along the 5 Freeway and in the Westside next to the 405 Freeway. But the sheer scale of Palmer’s output — more than 3,000 units either built or planned around the landmark four-level interchange — sets his developments apart.

Even after the fire, Palmer is planning to move in tenants next month at the surviving section of the Da Vinci. He also began applying earlier this year to build his biggest yet, according to city records: a 1,500-unit project on the southwest side of the interchange between the 101 and 110 freeways that opened in 1953 and carries an average of nearly 500,000 cars per day.
Palmer and his representatives did not respond to repeated requests for comment on the air quality issues surrounding his developments. Los Angeles planning officials were concerned enough about vehicle emissions near the 526-unit Da Vinci — which at one point stands roughly 10 feet from the 110 Freeway — that they required Palmer to install higher quality air filters in the project’s ventilation systems to capture a greater share of the particles produced from vehicle exhaust.
Still, those stronger filters will only work for residents who keep the windows and balcony doors closed, said David Pettit, senior attorney with the Natural Resources Defense Council. “If you’re sitting out on your balcony, or you even have the balcony door open, it doesn’t matter what air filter you’ve got in your unit. You’re going to get the full force of what’s coming off the freeway,” he said.
Studies produced over the last decade have linked freeway-adjacent living to respiratory problems, particularly in children and older adults. The health risk, said McConnell, becomes “really big” within 250 feet of a freeway. Yet the California Environmental Quality Act, frequently known as CEQA, offers little to ensure that builders address health risks faced by their tenants, city officials and some environmentalists say.
“The purpose of CEQA is to examine a project’s impact on the environment, not the environment’s impact on a project,” said City Planner Blake Lamb, who reviewed the Da Vinci’s application. School districts are prohibited under state law from building new campuses within 500 feet of a freeway unless they demonstrate that they were unable to find another location. In Los Angeles, the planning department has its own set of protocols for residential projects proposed within 1,000 feet of a freeway, which went into effect two years ago.
If a developer is seeking a zoning change, or has a project near a freeway large enough to trigger an environmental analysis, city officials may require the installation of higher-strength air filters or rework a building’s physical layout. Those requirements cannot be imposed for smaller projects in residential zones that add fewer than 50 homes and do not require a change in zoning or other discretionary permit, officials said.
Those protocols were used last year when the City Council approved a 595-unit apartment project on the Westside along the 405 Freeway. Development company Casden West L.A. was instructed to make sure none of its residences comes within 350 feet of the freeway. In addition, any home in a Casden project that is within 500 feet of the freeway must have heating and air conditioning filters with a rating of 13 out of 16 — a performance measurement established by the American Society of Heating, Refrigerating and Air-Conditioning Engineers.
City officials also placed air-quality restrictions on Il Villaggio Toscano, a 325-unit residential project planned next to the interchange of the 101 and 405 freeways in Sherman Oaks. In that development, lawmakers required air filters with a rating of 16, the highest generally available. Those requirements did little to satisfy opponents of the development, who filed a lawsuit over the project.
Palmer has a long track record of putting residential projects very close to freeways. The 632-unit Medici, one of Palmer’s earliest downtown developments, is one block from the 110 Freeway at Eighth Street. The 913-unit Lorenzo is roughly a block east of the 110 Freeway near USC. Still, nothing shows Palmer’s focus on freeway-adjacent property more than his projects around the four-level interchange.
On one side are the Orsini I, II and III — separate projects approved over the last decade at Figueroa Street and Cesar Chavez Avenue. On a second side is the Da Vinci. Earlier this year, Palmer began submitting traffic estimates for the 1,500-unit building that would go on the third corner of the interchange, according to documents obtained from the city’s Department of Transportation.
All three of the Orsinis were built before 2012, when the city’s new protocols on freeway-adjacent development went into effect. At the Da Vinci, city planners required Palmer to have a ventilation system with 13-level strength air filters. After The Times began asking about that requirement, inspectors determined that Palmer had not installed the equipment needed to accommodate those stronger filters, Zamperini said.
“We told the developer he had to make good” on the air filter requirement, he added. Palmer later complied, Zamperini said.
Still, higher performing filters will not be effective unless the city also has a monitoring program to ensure building owners are replacing them on a regular basis, said Jeffrey Siegel, associate professor in civil engineering at the University of Toronto. Regular inspections, Siegel said, would determine whether landlords are installing replacement filters at proper intervals that are as effective as the original ones.
Zamperini said there is now no mechanism for doing that unless inspectors receive a complaint. “Once we sign the job off, we don’t go back and monitor it. The permits don’t cover that,” he said.
david.zahniser@latimes.com