Congestion at ports of L.A., Long Beach is putting a damper on economy 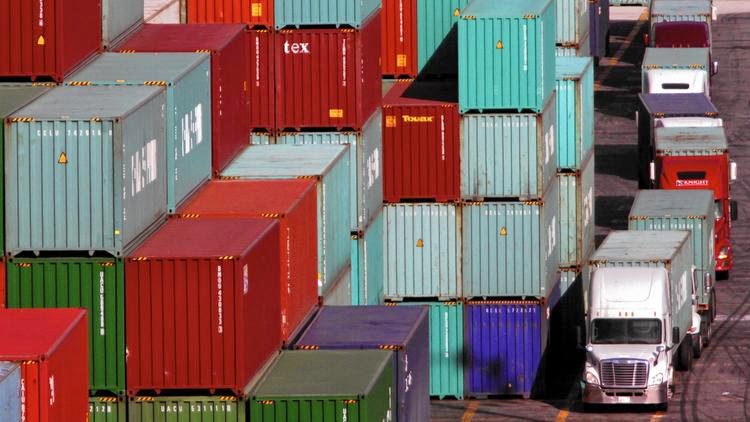 The number of ships at anchor off the coast has declined, but the docks at the Long Beach and L.A. ports still overflow with cargo. (Bob Chamberlin, Los Angeles Times)

Brutal congestion at the nation’s busiest ports in Los Angeles and Long Beach is throwing a kink into an economy that’s finally kicking into high gear.

The months-long bottleneck is hurting retailers and other businesses that aren’t getting their shipments on time as massive ships from Asia anchor off the Los Angeles coastline waiting for the docks to clear.
“It’s been the bane of my existence,” said Lisa Foster, whose Venice business sells reusable shopping bags imported from China. “And it’s only getting worse and worse and worse.”

That’s in stark contrast to a national economy that’s on pace to add the most new jobs since 1999. On Tuesday, the Dow Jones industrial average crossed the 18,000 threshold for the first time, after a government report showed the economy last quarter grew at the fastest pace in more than a decade.

Growth, however, would have been stronger if the ports — which handle roughly 40% of U.S. imports — were operating smoothly, said international trade economist Jock O’Connell. The negative drag probably will worsen in the fourth quarter, when the most brutal congestion surfaced, he said.

“This does act as a drag on the economy,” O’Connell said. “You want the ports, the entire supply chain to operate at maximum efficiency. And it’s not.”

L.A. and Long Beach are trying to speed up the flow of cargo. The ports are taking a variety of steps to ease the logistical nightmare they blame on the increased use of massive container ships, a surge in cargo as the economy improves and a shortage of the trailers that truckers use to haul goods from the ports. In February, a shared trailer system will roll out, designed to make the equipment more available for truckers.

And this week, the Long Beach Board of Harbor Commissioners voted to ask the federal government for permission to work with its competitor in L.A. in a bid to clear the docks.

“These are systemic problems that can only be solved by bringing all the parties together,” Port of Long Beach Chief Executive Jon Slangerup said in a statement.

According to terminal operators and shipping lines, dockworkers are also slowing down on the job to gain leverage during contract negotiations, further hindering the nation’s busiest port complex.

The congestion is wreaking havoc on supply chains across the country. Many retailers airlifted their goods or diverted them to the East and Gulf coasts to ensure presents arrived for the holidays.

Businesses are likely to eat the added costs, which will affect bottom lines in the fourth quarter, said Jonathan Gold, vice president of supply chain and customs policy at the National Retail Federation.

“The slowdown in the West Coast ports has been a much bigger deal than people think,” he said. “I suspect that you’ll see a lot of purchases of gift cards in lieu of merchandise.”

The logjam has been a nightmare for small firms as well.

Foster, owner of 1 Bag at a Time in Venice, said she can’t promise potential customers speedy delivery of her company’s reusable shopping bags from China. In response, would-be clients went elsewhere and sales were lost, she said.
“Uncertainty kills a lot of my business,” she said.

The situation has improved slightly since Thanksgiving, said Port of Long Beach spokesman Art Wong. The number of ships at anchor off the coast has declined, but the docks still overflow with cargo. And a likely cargo surge before the February Chinese New Year — when factories traditionally close — threatens to reverse any improvement.

According to the Pacific Maritime Assn., which represents employers operating shipping lines and terminal operators, the union is directly thwarting traffic flows by refusing to dispatch skilled workers for nearly two months at L.A. and Long Beach. Slowdown tactics have also been deployed in Oakland, Seattle and Tacoma, Wash., according to the employers.

Nearly 20,000 dockworkers at 29 West Coast ports have been working without a contract since July, when their six-year agreement expired.

The union says the congestion stems from other factors, including the shortage of trailers. Before the slowdown accusations surfaced, L.A. and Long Beach were already experiencing the worst congestion in a decade.

On Monday, employers called for federal mediation to help reach a new agreement, saying the two sides remain far apart on many issues. The union has not yet responded.

In the meantime, businesses such as electric bike shop Pedego Irvine say they don’t know what to do.

Owner Bob Bibee said the Chinese parts needed to assemble the bikes are repeatedly delayed at sea and on the docks.

“It is costing me thousands,” Bibee said. “It’s really frustrating; there’s nothing we can do about it.”

andrew.khouri@latimes.com
Twitter: @khouriandrew
Opinions expressed in this blog are those of the author, and do not necessarily represent the positions of the Moving Forward Network or its members. All errors are the responsibility of the author.