Earlier this month, we reported on a very promising personal air quality monitor in Buy a portable Particulate Matter 2.5 (PM 2.5) AirBeam monitor for under $200, and this author put his money where is mouth is, and ordered one.

Now, another personal device has been announced.  This appears to be at an earlier stage of development than the AirBeam, and initially targeted at China.  However, with a University of California at Berkeley birthplace and a target price point of $50-$75, is promising.

Regardless of which of the many devices on the market (e.g., Air Quality Egg) or in development turns out to be the market leader, one thing is clear – air quality monitoring will soon be within the reach of millions of households.

While these devices will not supplant professionally calibrated monitors and sophisticated lab analyses any time soon, they are game changers.  No longer will air quality information be the exclusive purview of Federal and State agencies and others with deep pockets.  Communities will become increasingly empowered to monitor the safety of the air they breathe, and raise the alarm when they find dangerous conditions.

For more background on Next Generation Air Monitors, please visit the MFN Library. 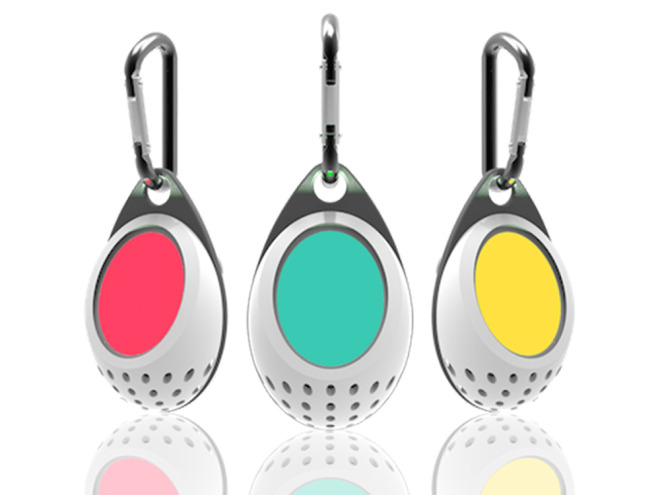 courtesy Clarity
China’s air quality is notoriously bad.
How bad? It has slowed photosynthesis in plants and possibly impacted the country’s food supply. One scientist describes conditions as “similar to a nuclear winter.”
Earlier this year, Beijing’s concentration of PM 2.5 particles—those fine enough to penetrate the lungs and enter the bloodstream—reached 505 micrograms per cubic meter, and the World Health Organization recommends a safe level of 25. Forty percent of global air pollution-related deaths—1.2 million in total—have been linked to PM-2.5 pollution in China, according a 2013 WHO report.
This means it’s vitally important that the Chinese keep a close eye on the quality of the air around them. But reliable data can be difficult to come by. Just last week, when several major heads of state met for an important regional summit in Beijing, the government reportedly blocked air pollution data provided by the U.S. Embassy from being displayed on local smartphone apps and websites. 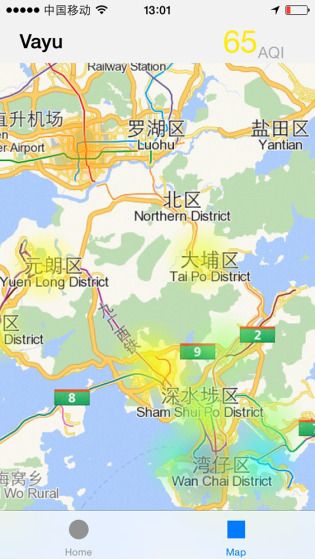 Screenshot: courtesy Clarity
It’s no small problem, and David Lu aims to solve it. Together with seven other students at the University of California, Berkeley, Lu recently created a new kind of air pollution sensor dubbed Clarity. This keychain-sized gadget lets you constantly track your personal exposure to air pollution via a smartphone app. But it’s also a way of crowdsourcing much broader studies on air quality—not only across China but throughout other parts of the world as well.
Basically, Lu and company will pool data from everyone wearing the device, and when enough of these gadgets are deployed, Lu says, they can feed pollution maps of any city. “Our mission,” Lu says, “is to empower people to collect information about their environment and take care of their environment.”
The effort is part of a larger movement to address environmental problems using the power and flexibility of internet-connected sensing devices. In the past, this included such gadgets as WNYC’s cicada tracker and Air Quality Egg. But the advent of the smartphone—and the new breed of wearable technology that connects to these phones—has unchained these types of sensors. As Lu strives to monitor air pollution in other parts of the globe, a new wearable called AirBeam aims to do much the same thing here in the U.S.

Once these devices are in the wild, Lu and company will start pooling all data on its cloud service. In essence, when the device senses a big change in the concentration of pollutants, it will trigger additional software that makes use full of the device’s power to get an accurate reading.
The system will create a stamp of the date, time, geographic location, and air quality data, and when it’s connected to the net, it will upload the data to the cloud service. This information wouldn’t be associated with a user’s identity, but collectively, it can provide a better indication of air problems across large geographies.
According to Lu, this also means that in the future, Clarity can use its pollution maps to provide additional information to individual users. If the service knows that a park, cafe or school is polluted, it could recommend a similar site with clean air. At gatherings in China, Lue and Hagen say, they saw particular interest from parents in this kind of thing.
“Parents want to make sure that when their kids are indoors for long periods of time—like in their room, at school or in a gym—those places are safe. And if they’re not, then they can do something about it immediately,” Hagen says.

Lu and company are also in talks with online retailers who could deploy the devices among their express delivery people, who shuttle packages across China via electric bike. This will help the startup gather important preliminary data before Clarity is available to consumers, so it can start offering insights right at launch.
Eventually, Lu and Hagen say, they want to sell their sensor to other companies who can embed it in cars, smart-home systems, air purifiers, and other products. Their goal is to eventually transition to being a platform that collects the data and analyzes it for governments and other researchers. As Lu puts it: “We’re using a business structure as an excuse to get involved in a social venture.”