This is a an excellent article by our friends in the Sierra Club, highlighting the community of EJ activist, community organizer, and Moving Forward Network co-founder, Juan Parras.

Thank you Juan, for all that you do!

Our Neighbors, the Rolling Bombs

Juan Parras knows well what it means to live surrounded by rolling bombs, and the frequent sound of the whistling engines pulling more than 100-car trains loaded with oil crude into his community is a constant reminder.

Parras lives and works in Manchester, the Houston Latino barrio with some of the heaviest oil train traffic in the country.

“Here we have the largest concentration of railroad crossings in the land,” says Parras, founder and executive director of Texas Environmental Justice Advocacy Services, which has been active in Manchester for many years. “When we drive around here, we have to stop and wait for the trains to pass three or four times per trip.”

After 9-11, a lot of trains with dangerous cargo were diverted from communities as a matter of precaution and safety. But that is not the case in Manchester.

“This is a big issue because of national security and because of the extreme danger that this brings to communities,” says Parras. “The train yards around us containing hundreds of cars are left unguarded and anyone willing to do some serious damage can walk up to them unimpeded.” 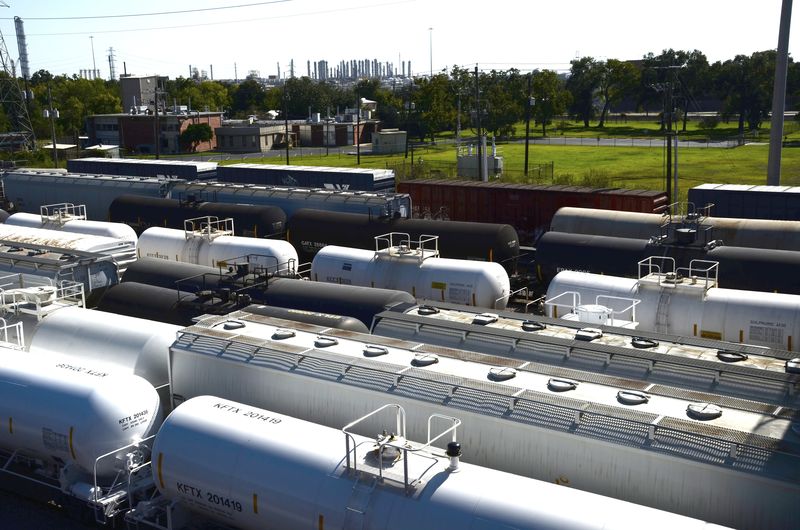 Train cars loaded with petrochemical products in Manchester, Houston (Photo: Juan Parras)
Since 2005, the oil train traffic in North America has increased 40 fold. At any given moment, some nine million barrels of crude oil are being transported around North America. Yet we haven’t seen any real improvements in the safety of these trains. The oil and railroad companies, however, seem to be whistling past the graveyard.

In 2013, a train loaded with crude from North Dakota derailed and exploded, killing 47 people and leveling a section of the town of Lac-Mégantic, in Quebec, Canada. Since then, there have been accidents in Alabama, Colorado, Minnesota, North Dakota, Pennsylvania, and Virginia. 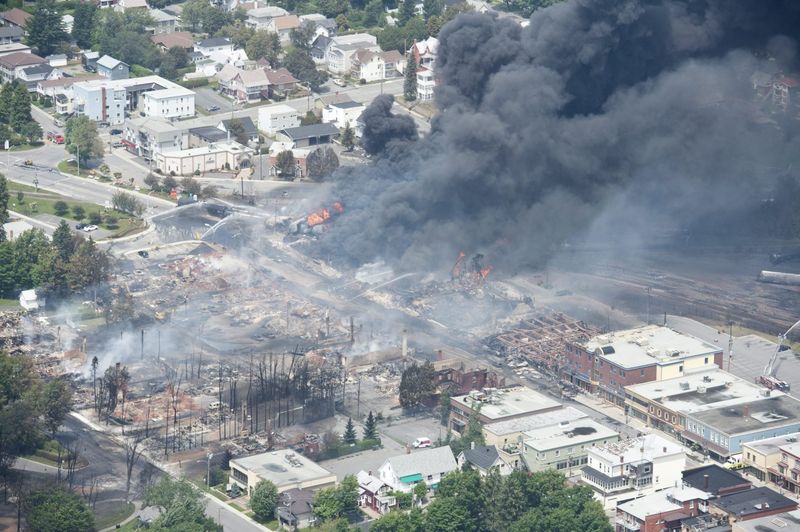 Aftermath of the Lac-Mégantic, Quebec, oil train disaster (Photo: Elias Schewel)
Living close to these trains is like rolling the dice. And the ones who are most vulnerable to these rolling bombs are us, Latinos, and other communities of color. According to a study by ForestEthics, out of the 25 million people who live in the oil trains blast zone, 15 million (60 percent!) are members of minority communities, including Manchester.

“Fortunately, we haven’t had any derailments or explosions with serious consequences on the population,” says Parras. “But we’ve had close calls. In the past year there’ve been two train derailments in our community. In one instance, the train was carrying dangerous cargo, the cars leaked but did not explode.” 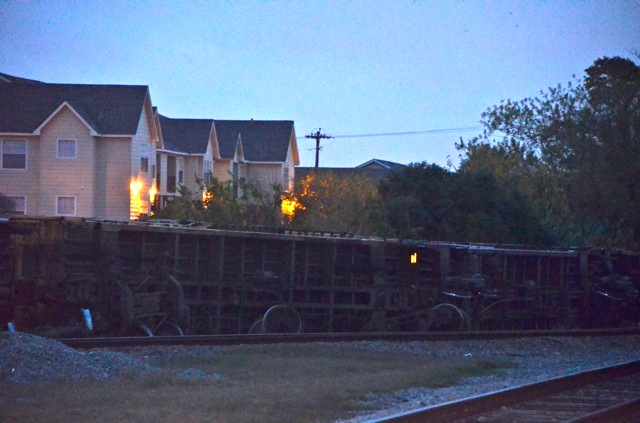 Recent derailment in Manchester, Houston (Photo: Juan Parras)
These dismal safety conditions in too many oil trains intensify the danger for millions of people. In a document submitted to the US Department of Transportation, several groups, including ForestEthics and the Sierra Club, underlined several flaws that make this railroad traffic “an unacceptable public risk.”

Perhaps the most clear and present danger is the widespread use of obsolete DOT-111 rail cars, which lack reinforcement in their shells, making them much more fragile in case of derailment.

The groups demand that the Obama administration immediately improve the safety and security of oil trains by adopting the following recommendations:
•    Immediately banning the use of DOT-111 rail cars and a quicker phase-out of other unsafe types.
•    Expanding the emergency response preparedness in the communities situated in the blast zone.
•    Imposing speed limits and requiring state-of-the-art breaking systems on oil trains.
•    And requiring liability coverage to cover the true costs of crude-by-rail disasters.

And while these demands are considered, Juan Parras and the rest of the Manchester residents keep looking over their shoulders every time they hear a train whistling into town. “Here comes another rolling bomb into our barrio,” they say.