12 hours ago  •  By CRAIG GIAMMONA and LYNN DOAN Bloomberg News 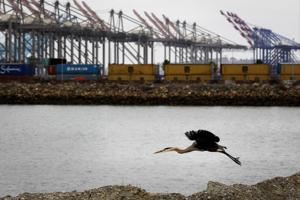 A bird flies as shipping containers stand on rail lines at the Port of Los Angeles in San Pedro, Calif. on Monday, June 30, 2014. Photographer: Patrick T. Fallon/Bloomberg
Enlarge Photo
SAN FRANCISCO • After years of ending the holiday shopping season with too much merchandise stacked in their warehouses, U.S. retailers face the opposite this year: They may not have enough.
Equipment shortages, labor negotiations and rail delays are slowing shipments from the Ports of Los Angeles and Long Beach, the nation’s biggest container hub, just as retailers are piling up goods for their most important period of the year. Cargo shipments through the two ports rose 3.1 percent in the third quarter, slower than the 4.3 percent gain a year earlier.
The turmoil comes at a bad time for merchants — scarred by the weak sales that followed the financial crisis — that have been keeping inventories lean to avoid resorting to profit-eating discounts to clear out the unsold goods.
“They’ve essentially squeezed out the buffer time to react if there’s an issue,” said Frank Layo, a partner at retail consulting firm Kurt Salmon in Atlanta. “As soon as you introduce some serious supply-chain risk, you’ve painted yourself into a corner.”
That cushion would have been useful this year. Storage space at several of the Port of Los Angeles’ container terminals ﻿is 90 percent full as shipments wait to be trucked to customers, said Phillip Sanfield, a spokesman for the harbor. A large part of the problem is the scarcity of chassis, the wheeled metal frames that carry containers behind trucks, he said.
Shipping lines have been exiting the costly business of maintaining and operating chassis in the last year and a half, and the operators that have taken over are still getting the hang of supplying enough chassis at the right time and place, Sanfield said.
Labor negotiations have worsened the problem, Sanfield said. The ports have been working with chassis operators to form a pool that would help them better coordinate where the equipment is needed, Sanfield said. Such a network may require the approval of the International Longshore and Warehouse Union. That group’s leaders have been mired in negotiations with U.S. West Coast terminal operators since their contract expired in June.
The situation is coming at an inopportune time for retailers. Purchases in November and December are projected to account for 19 percent of U.S. retailers’ annual sales, according to the National Retail Federation. Holiday sales this year may advance 4.1 percent to $617 billion in those two months, topping last year’s 3.1 percent gain and the 10-year average of 2.9 percent, the trade group said.
Most Christmas merchandise already is on store shelves, though a work stoppage at the ports could become an issue if retailers need to replenish supplies for last-minute shoppers, said Craig Johnson, president of Consumer Growth Partners in New Canaan, Conn.
“It isn’t going to affect the bulk of Christmas for the retailer,” he said. “Retailers looking to replenish hot products part way through the season could be impacted.”
While most big retail companies have a “diversified inbound strategy,” for shipments, a strike at the Los Angeles and Long Beach ports in the next few weeks would strand merchandise that’s currently at sea, Layo said.
“It’s not like you can just call up the captain of the ship and say, ‘Take a left and head up to Seattle,’” Layo said. “If it’s already left Shanghai, it’s at risk because you can’t just divert it easily.”
After hearing concerns from about the port situation, Layo convened a meeting with 10 major U.S. retailers to discuss the issue in Chicago earlier this month. He said most of the companies had reported delays moving cargo through Los Angeles to their stores across the country.
Target, Costco, Home Depot, Samsung and Kmart were the top five importers, by weight, at the Los Angeles and Long Beach ports through Oct. 14﻿.
Opinions expressed in this blog are those of the author, and do not necessarily represent the positions of the Moving Forward Network or its members. All errors are the responsibility of the author.