For more on this subject, see  Oil by Rail – MFN Library

CCAN is also working to protect the public from the Cove Point fracked gas export plant in Southern Maryland. 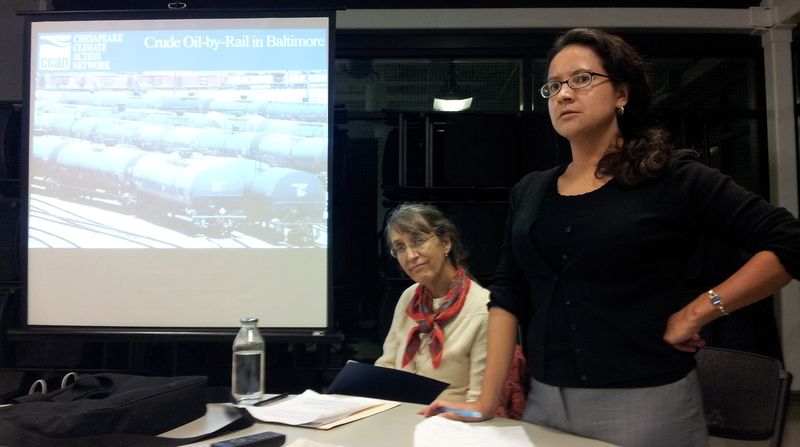 Rebecca Ruggles (L) of the Maryland Environmental Health Network and Leah Kelley of the Environmental Integrity Project listen to questions from the group.
On Tuesday night I joined a small group of concerned Baltimore residents to hear more about the threat of crude oil trains running through Charm City.
The Chesapeake Climate Action Network (CCAN) organized the meeting – the first of three in the city to discuss a proposed oil export terminal.
According to CCAN:
The oil industry is targeting Baltimore as an easy through-way to export crude oil to refineries along the East Coast, and potentially throughout the world. In the Baltimore community of Curtis Bay, Targa Terminals is seeking approval to construct a crude oil export facility that would cause more air pollution and bring significant safety risks to South Baltimore and the city as a whole. A crude oil train or port explosion could threaten thousands of Baltimore residents, local property and the environment.
The proposed Targa Terminal would mean 9.125 million barrels of oil every year would be exported out of Baltimore – which means some 12,766 rail cars annually. Broken down further, that’s one train of 35 cars every day running right through the city.

In Morrell Park, where this meeting took place, you could say we’re suffering from a little activism fatigue.We just won a years-long fight against a polluting rail/truck facility proposed for our neighborhood. The Targa Terminal itself would be in Curtis Bay, a community already very overburdened by industrial pollution and already fighting a proposed incinerator.

While I’ve heard extensively about crude-by-rail risks because of my work with the Sierra Club, it becomes so much more real when a disaster could happen right in your neighborhood. I’ve long wondered what all CSX was transporting by rail through our neighborhood. I know some of it is coal cars, and some of the tanker cars are labeled with some very confusing and toxic sounding things – but not all of the tankers are labeled. And now we could see even more rail cars — and not just more of them, but rail cars that are more prone to derailment (DOT-111 – which the National Transportation Safety Board said have a “high incidence of failure”) and will be full of crude oil? The meeting’s attendees were shocked by the map (shown here at the right – courtesy of ForestEthics) showing the evacuation zones and potential impact zones should just one oil train car derail and explode.

“These cars and rails aren’t meant to handle all this,” said Jon Kenney, an organizer with CCAN. “All of downtown Baltimore is in an evacuation zone.”

Residents of Morrell Park and several surrounding neighborhoods are already very familiar with the huge number of trains running through the neighborhood. A “Welcome to Morrell Park” mural at the community’s entrance is dedicated to trains. We know that a number of hazardous chemicals are transported by rail through the area – we just aren’t being told what.

“We tried to get a list of what they’re transporting, but they won’t give it to us,” said one Mt. Winans resident (a neighborhood bordering Morrell Park) at the meeting.

This controversy isn’t just limited to us. The Maryland Department of the Environment is attempting to force CSX and Norfolk Southern to disclose the amount of crude oil on the cars, but those companies took MDE to court over it.

For now, CCAN, the Environmental Integrity Project, the Maryland Environmental Health Network (all represented at Tuesday’s meeting) and many other groups are pushing for MDE to reject the air pollution permit Targa Terminal has applied for and for the Baltimore City Council to pass an ordinance banning any crude-by-rail in the city.

There will be a public hearing on the air permit, the date just hasn’t been announced yet. And as I said above, there are more community meetings planned along the crude-by-rail route right through Baltimore. CCAN and others are encouraging and working with these communities to unite against very real the crude-by-rail dangers.

“Communities have to raise the health and safety issues here,” said Rebbeca Ruggles of the Maryland Environmental Health Network.

As a resident of Baltimore and a neighborhood dissected by a number of rail lines dedicated to hazardous materials, I plan on being very involved.

— Heather Moyer, Sierra Club
Opinions expressed in this blog are those of the author, and do not necessarily represent the positions of the Moving Forward Network or its members. All errors are the responsibility of the author.