Those small, personal air monitors that are on the cutting edge of environmental technology and have been deployed in Louisville are turning out to be less useful than originally thought. 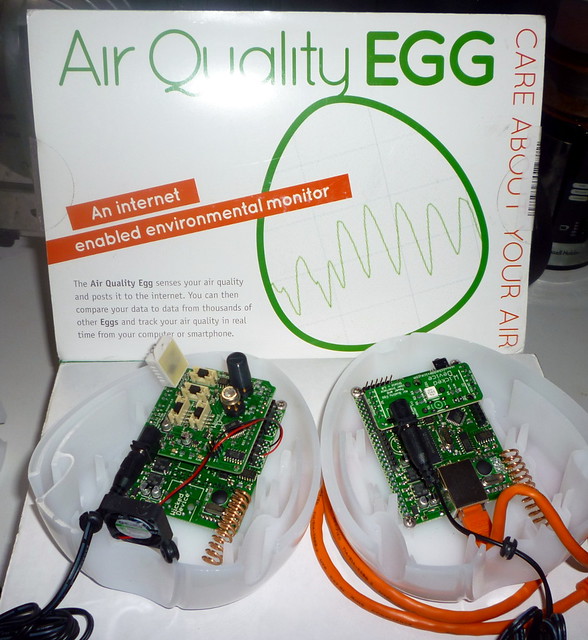 Backed by philanthropist Christy Brown and her Institute for Healthy Air, Water and Soil, an Air Quality Egg deployment announced in April has stumbled through technical difficulties and limitations.
“It’s been a learning journey,” acknowledged Ted Smith, who in July was hired as the part-time executive director of the institute, while retaining a part-time post as Louisville’s chief of civic innovation.
Technological shortfalls of the same micro-monitors have also hampered a similar effort in the Boston area, said Michael Barnett, a Boston College professor of science education and technology involved in that effort.
“All of the readings you have to take with a big grain of salt,” Barnett said. “Eventually, these are going to get better. It’s just a matter of time.”
But in both Boston and Louisville, Barnett and Smith said the eggs do not consistently report their readings through the Internet, are not reliably accurate, and are not designed to allow comparison of pollution data from one device to another.

Newly hung Air Quality Egg monitor on the side of Garner Narrative Contemporary Fine Art Gallery. (Photo: Courtesy Gordon Garner )
In Louisville, Smith has found that the eggs are also unable to communicate through Metro government and Jefferson County Public Schools computer systems, which has limited their deployment.
Their readings of carbon monoxide — which can be deadly — are so far off, they could be dangerously misleading, Smith said, and he no longer displays them on the Louisville Air Map website that was created for the Louisville project. They could still show up on another website that shows all reporting eggs worldwide.
And last Thursday afternoon, all eight monitors reporting data to the Louisville map within the previous 24 hours showed extremely elevated levels of nitrogen dioxide, even as Louisville Air Pollution Control District monitors in the area put that pollutant in the “good” range.
Smith said he may need to remove the nitrogen dioxide levels from showing up on there, too.
Despite the reports of shortfalls, one of the developers of the egg-shaped monitors said he was standing behind them — while working on improvements.
“These are not medical devices,” said Dirk Swart, co-founder of Wicked Device LLC, which launched the eggs in 2012 as part of what the U.S. Environmental Protection Agency calls the next generation of air monitoring. “They are not intended to be used in any way other than as a guide.”
He said he was aware that the Louisville institute was having some difficulties and said he has offered to help resolve them.

A TARC bus passes under a small air quality monitor shaped like an egg that hung from a window in a downtown building earlier this year. (Photo: JAMES BRUGGERS/THE COURIER-JOURNAL )
Citizen science
The Louisville air district, Indiana and Kentucky operate a network of official, sophisticated and expensive air monitors in the region, checking levels of certain regulated pollutants. EPA requires that monitoring to be accurate.
Until last November, the University of Louisville, working with the West Jefferson County Community Task Force, had also monitored a variety of other toxic chemicals in the air, especially in neighborhoods near Rubbertown chemical plants. Those samples were analyzed in a university lab.
Brown unveiled this new, citizen-science initiative in April at a cocktail supper for 200 people, including Mayor Greg Fischer. Participants were encouraged to buy and sponsor the eggs from the institute at a reduced price — $200 apiece instead of the $243 price from the manufacturer’s website at the time.
The hope was that the eggs could help identify pollution hot spots and compare neighborhoods for pollutants such as nitrogen dioxide, carbon monoxide and particulates. The institute has since added an ozone capability to the eggs, which also measure temperature and humidity.
But the monitors are not calibrated for accurate comparisons, making it difficult to identify pollution hot spots, said Russ Barnett, director of the Kentucky Institute for the Environment and Sustainable Development at the University of Louisville.
He said he is working with Brown’s institute and other partners on an EPA grant proposal for a project to deploy a lot more and a larger variety of micro-monitors in Louisville and study their effectiveness.
For his part, Smith said he’s not giving up on the eggs.
He said he is working to place another 80 of them to reach the institute’s goal of 100, in a geographically dispersed network. That network, he said, can be updated later with newer and better technology.
“I am not telling you it was a bad idea,” Smith said, adding that the effort’s most important accomplishment so far has been its work on the Louisville Air Map website that displays readings from the eggs along with current government air quality data and other environmental health information.
Swart said his company is working on egg improvements, but added that “greater accuracy will come with increased costs.”
Opinions expressed in this blog are those of the author, and do not necessarily represent the positions of the Moving Forward Network or its members. All errors are the responsibility of the author.