Two thoughts about this project:

1.  How can a proposed intermodal facility be called ‘viable’ when a public subsidy of 1/3 of the construction cost is not enough?

2. How great to see a county government that protects its residents from the health and other impacts of an intermodal facility by opposing it.

By Jeff Sturgeon, jeff.sturgeon@roanoke.com 981-3251
A spiking price tag and the possibility of more litigation are challenges to someday building a proposed freight terminal near Elliston, but with enough public funding, it could be done, and in ways that make economic sense, a consultant said.
Described as a terminal for shifting freight containers from trucks to trains and vice versa, the project could bear hundreds of new jobs within a few years, according to Aecom, a global engineering and design firm. 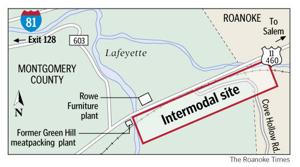 Truck-dependent businesses that began to ship goods and materials through such a facility would save on transportation expenses, according to the publicly funded report released in draft form Wednesday. Once paid for, the facility would likely be self-supporting, the report said.
While this is about goosing the economy, the environment would benefit in the form of reduced traffic and vehicle emissions, the consultants said. With up to 15,000 shipping containers shifted off trucks rolling up and down highways — the dominant form of freight transportation in the region — roads would last longer, the report said.
All that said, the experts highlighted several “ifs and buts” behind the concept of combining the forces of trucking and Norfolk Southern Corp. rail into a fixed industrial facility near train tracks and Interstate 81 in eastern Montgomery County.
NS told consultants that the project’s estimated price, originally $35.5 million, has doubled to $70.7 million. The consultant thinks $77.5 million is a better estimate to build the facility as originally conceived at the original site near Elliston, but advised that decision makers could shrink it or even move it to cut expense without sacrificing performance.
Either way, it will require a public subsidy, as have several other intermodal terminals, and one larger than the $25 million set aside previously by the state and still considered available.
In addition, Aecom predicted that Montgomery County, whose board of supervisors sued unsuccessfully to block the project, would “likely” bring more litigation if backers move toward construction.
Right now, the railroad’s Heartland Corridor freight trains running between Norfolk and Chicago pass by the designated site without stopping, and county officials have indicated that’s how they like it.
Other challenges include the finding that, while there is some regional demand for the services of such a facility, there is no easily identifiable anchor user.
After all, if companies were demanding the service, the railroad would have built the terminal by now, consultants said. Instead, the 65-acre site is mostly vacant, two-thirds owned by the railroad and a third in private hands.
About a year in the making, the 164-page, data-heavy draft report brims with new information about a potential economic driver — a freight transfer station that has been talked about for more than six years but which never moved off the drafting table.
If built, the facility would be in the same league as a planned expansion of broadband linkages regionally, the expected resurrection of passenger rail service between Roanoke and Washington, D.C., by September 2017 and the future construction of Interstate 73 in Virginia, according to Roanoke Valley Area Metropolitan Planning Organization staff.
A commission press release was headlined: “Study shows profitable intermodal facility will plug Western Virginia into global supply chain.”
Under one scenario that modeled the facility opening in 2019, the project would create 887 temporary construction jobs and 636 permanent jobs within its first three years.
The next step is to determine whether the rail project — born on paper in 2008, then delayed by litigation and the recession — still makes sense.
“We need to find out if this is still important to the region,” said Wayne Strickland, who directs the Roanoke Valley-Alleghany Regional Commission, which asked for the study to restart discussion about the project after the railroad backed away from it several years back. The report is expected to cost the state about $200,000.
This afternoon, regional commission staffers plan to present the document, titled “Roanoke Region Intermodal Freight Facility: Economic and Transportation Impacts,” to the Roanoke Valley Area Metropolitan Planning Organization, a coalition of local government leaders.
Strickland said it eventually will be revised as needed, formally accepted and released for public discussion and review. The agency, which is on record as supporting the general concept, hopes to convene meetings around what it now calls the Western Virginia Intermodal Facility.
The Gatorade plant in Wythe County, now constrained by limited access to trucks, told consultants the opening of an intermodal center could enable it to expand, perhaps significantly.
In addition, the current expansion of the Panama Canal to handle larger U.S.-bound container ships is expected to increase freight moving into and out of the Eastern United States. The Port of Virginia told consultants, however, it isn’t sure how much more volume it will get.
Opinions expressed in this blog are those of the author, and do not necessarily represent the positions of the Moving Forward Network or its members. All errors are the responsibility of the author.