Scientists On A Quest For Knowledge About Coal Dust Risks

1 / 3
Previous imageEnlargeNext image
Scientists from the U.S. Geological Survey head into the marshes of the Steigerwald Wildlife Refuge near Washougal, Washington to learn how coal dust from trains might impact the environment. | credit: Ashley Ahearn | rollover image for more
WASHOUGAL, Wash. — Coal had been transported around the country by rail for decades before the recent push to bring it by train to ports in the Northwest.
And yet, scientists don’t really know how much coal dust could escape from rail cars, how far it might travel, and what coal-borne mercury and other contaminants might do to aquatic life.
With the permitting process moving forward for two large coal terminals in Washington, a team of scientists with the U.S. Geological Survey is trying to find out how the chemicals in coal might interact with the environment.
“We really don’t know what the effects are and whether it is an issue,” says Bob Black, a scientist with the USGS.
Black is the lead scientist on the new study, which has him squelching through the muck at the Steigerwald Wildlife Refuge near Washougal, Washington. The refuge is sandwiched between the Columbia River to the south, and train tracks to the north.
Black and his team are gathering data for a first-of-its kind scientific study of coal and its potential impacts on wetland ecosystems. As he sloshes through the shallow marsh’s waters to plant minnow traps, Black says he knows that he’s also wading into a controversial issue.

“There are communities that are economically interested in this and then there are suggested environmental impacts and ultimately I can have my own personal views but I can’t let those come into play and essentially that’s our role. We can’t let that be part of our science,” Black says.

The team fans out across the marsh as a BNSF Railway train screeches along tracks less than a quarter-mile away. This train is not hauling coal. Right now, roughly one coal train per day travels along the Columbia River before turning north and following the shoreline of Puget Sound to service Canadian coal terminals. But if terminals are built in Longview and near Bellingham, that number could jump to more than 20 coal trains per day.
Some coal does escape from trains, as BNSF has testified publicly in the past. Environmental groups have sued BNSF Railway for violating the Clean Water Act by allowing coal and coal dust to escape from trains and get into waterways along tracks in the Northwest. A judge ruled this month in favor of local groups in Seward, Alaska after they sued a nearby coal terminal for similar Clean Water Act violations. However, supporters of coal exports have called the coal escapement issue a red herring, used by anti-coal environmental groups to spark public alarm.

The USGS is gathering samples of muck, fish and insects from two sites in this wildlife refuge, one close to the tracks, the other farther away. The goal is to find out whether more mercury and polycyclic aromatic hydrocarbons (PAHs) are showing up near the train tracks and how those contaminants are behaving in the environment. 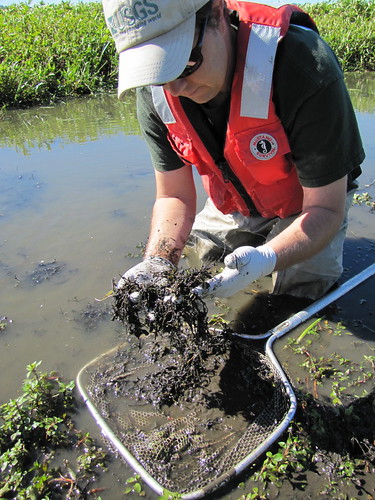 Collin Eagles-Smith hunts for dragonfly larvae at Stiegerwald
Lake National Wildlife Refuge. Credit: Ashley Ahearn
Collin Eagles-Smith, an ecologist with USGS, stands thigh-deep in the marsh, net in hand. He’s sifting through handfuls of black muck, looking for dragonfly larvae. When he finds one, he opens his palm to display the specimen before putting it in a little plastic baggy to take back to the lab for analysis. Eagles-Smith says dragonflies can serve as vectors to transmit mercury contamination out of the aquatic environment and into land-based ecosystems because they feed on all kinds of plankton and other tiny organisms. When they grow up and fly out of the muck they are in turn eaten by birds, frogs, fish and other animals, potentially transferring mercury contamination up the food chain.
“So what we’re looking at is essentially, is there mercury in this dragonfly and then we’re going to be using a fairly sophisticated approach to fingerprint the isotope ratios of the mercury to see if we can say whether the mercury in this dragonfly was from coal dust,” he explains.
By comparing dragonfly larvae, sediment and fish samples from this site with those from another site farther from the tracks, the team hopes to see how far contamination from coal trains could travel. But Eagles-Smith says there are still a lot of questions about how active the mercury in coal might be if it gets into the environment. Mercury is believed to be inert and less harmful to the environment until it goes through a complex biological process known as mercury methylation.

“I like to think of it as activating the mercury, and it makes it more biologically available, more toxic. Do you smell that rotten egg smell?” Eagles-Smith asks from his mucky perch. “That is the smell of tiny organisms breaking down organic material. Those same organisms are the ones that take the mercury, the less toxic form of mercury, and convert it into the methyl mercury.”

Once it’s methylated, mercury has been shown to be a potent neurotoxin, Eagles-Smith explains. “It can influence stress hormones, thyroid hormones, and sex hormones so it can impact wildlife reproduction, fish behavior, their survival, their ability to hunt for prey or their ability to avoid predation.”

The unique rotten-egg decaying process that takes place in low-oxygen marshy environments like this means that wetlands could be hotspots for transforming inert mercury from coal into a more toxic and biologically-available form that can then make its way up the food chain, the scientists worry.

Emerging technology is helping scientists zoom in on more specific sources of mercury pollution in the environment. Mercury can travel in air pollution for thousands of miles. But scientists want to know if coal trains that pass through wetlands like this might serve as a sort of direct deposit of mercury pollution.
The USGS expects to have preliminary results within the next 6 months, though the researchers caution that this is a small sample size and more study is needed. The results will be shared with the state and federal agencies that are studying the environmental impacts of the two proposed coal terminals in the Northwest.
Opinions expressed in this blog are those of the author, and do not necessarily represent the positions of the Moving Forward Network or its members. All errors are the responsibility of the author.