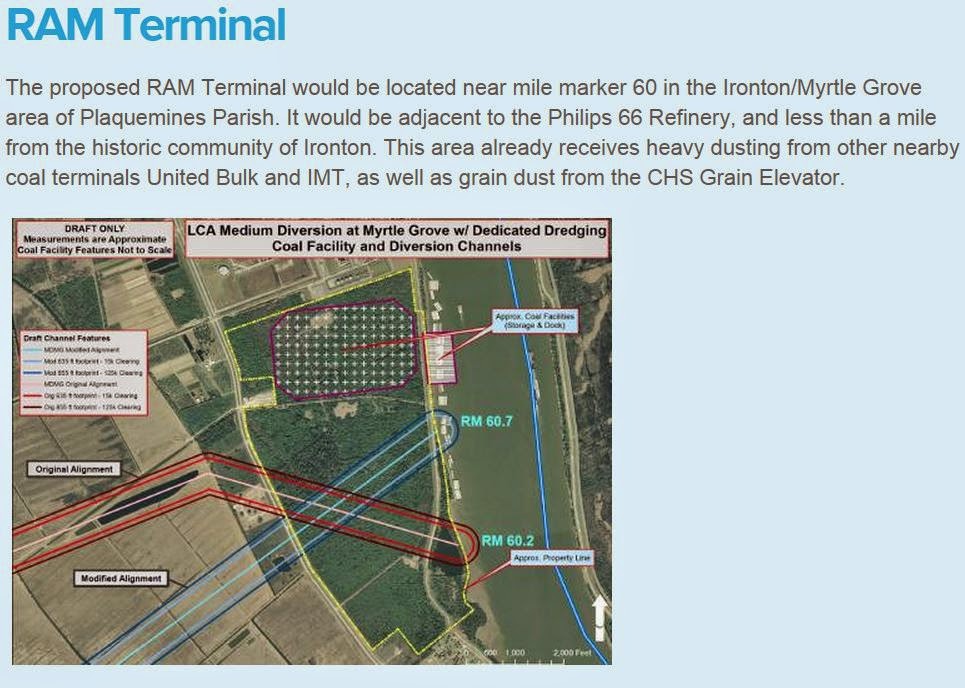 FOR IMMEDIATE RELEASE
Sept. 11, 2014
GRETNA, LA – Community members fighting the proposed RAM Terminals coal export facility earned a major victory when Gretna’s City Council unanimously called for an environmental impact review and public hearing on the project slated for a site in nearby Plaquemines Parish. Public opposition to the terminal has mushroomed in recent weeks. More than 100 local residents – many carrying “No Coal Train” signs – turned out for the Aug. 13 Gretna City Council meeting. Residents called on the City Council to take a stand against both coal trains and the RAM terminal.
“This is great news for all of us who are worried about coal export terminals and coal trains,” said Gayle Bertucci, a retired schoolteacher who lives less than 40 feet from tracks that would be used by mile-long coal trains. “The Army Corps needs to complete a comprehensive environmental impact study and hold public hearings so people and officials can see the damage that the RAM coal export terminal would do to our wetlands, water and air.”
During its Sept. 10 meeting, the Gretna City Council unanimously passed a resolution calling on the Army Corps of Engineers to conduct a “comprehensive environmental study on the impacts of the proposed RAM terminal project,” planned for a site near Ironton and Myrtle Grove in Plaquemines Parish. The City Council also called for a public hearing to “educate the public and city officials as to the economic and environmental impacts” of the proposed terminal.
“We have come together to stand up to protect our health, our property and our quality of life – and this shows it’s working,” said Laurie Ledet, a member of the Gretna Historical Society and a champion of the town’s historic district.
Holding a public hearing and conducting a full Environmental Impact Statement could delay the 404 permit process for the proposed RAM Terminal. The terminal cannot be constructed without that go-ahead, and now a growing movement – city councils, West Bank residents, and local conservation groups – is calling on the Army Corps to conduct a full and complete analysis of all its impacts before making a decision on the permit.

“I’m so proud of the City of Gretna,”  Ledet  said.  “It was wonderful to watch the Gretna City Council and Mayor Constant take a courageous stand to protect our historic community from RAM terminal’s coal trains and the threat that the terminal presents to coastal restoration.”
Gretna’s resolution follows action by Westwego in June. Led by Mayor John Shaddinger and Councilman Glenn Green, Westwego passed a resolution that also called on the Army Corps to conduct an environmental review and hold a public hearing on the RAM Terminal.
Residents are now calling on the Jefferson Parish Council to build on town leadership to pass its own resolution with the same demands. The RAM Terminal and coal trains are expected to come up at the council’s meeting next week.
Plaquemines Parish is already home to two coal export terminals. Residents living nearby suffer with heavy coal dust pollution, which causes respiratory ailments and collects on their homes and property. Aerial photos and satellite images demonstrate pollution of the Mississippi River from the terminals. A recent report in NOLA.com/Times-Picayune suggests that coal from the terminals is already polluting sediment used in major coastal restoration projects.
Local residents who have been fighting coal export terminals recently joined with the Clean Gulf Commerce Coalition, an alliance of environmental groups working to turn back plans to increase coal exports throughout the Gulf Coast, .
The Clean Gulf Commerce Coalition includes Air Alliance Houston, Gulf Restoration Network, Louisiana Environmental Action Network (LEAN), Public Citizen, Sierra Club, and SouthWings.
Contact: Nancy Nusser, nnusser@citizen,org; 410 934 9588
Opinions expressed in this blog are those of the author, and do not necessarily represent the positions of the Moving Forward Network or its members. All errors are the responsibility of the author.