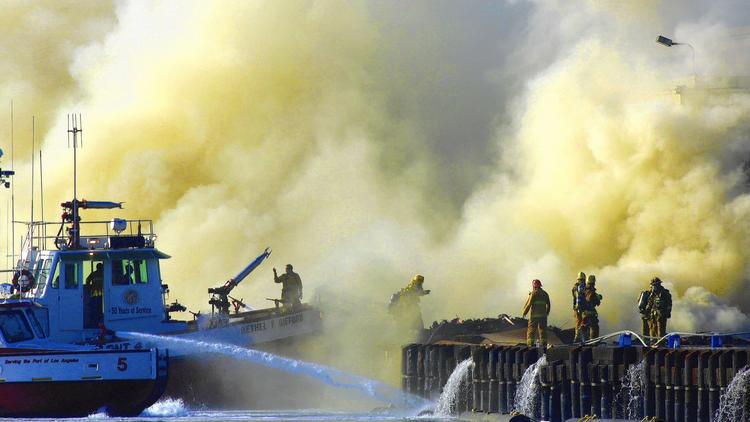 Smoke and possible toxic fumes rise from a still-smoldering fire on a wharf at the Port of Los Angeles. (Irfan Khan, Los Angeles Times)
By RUBEN VIVES AND VERONICA ROCHA
A smoky, stubborn blaze that enveloped the Port of Los Angeles in a cloud of toxic soot challenged firefighters who turned to fireboats and scuba divers to attack the creosote-soaked World War II-era wooden pylons that smoldered on the waterline.
The potentially hazardous smoke that billowed from the wharf Tuesday prompted health alerts as far south as Huntington Beach and left parents at one Wilmington grade school fuming when students were initially told school was in session, only to be evacuated at midday. 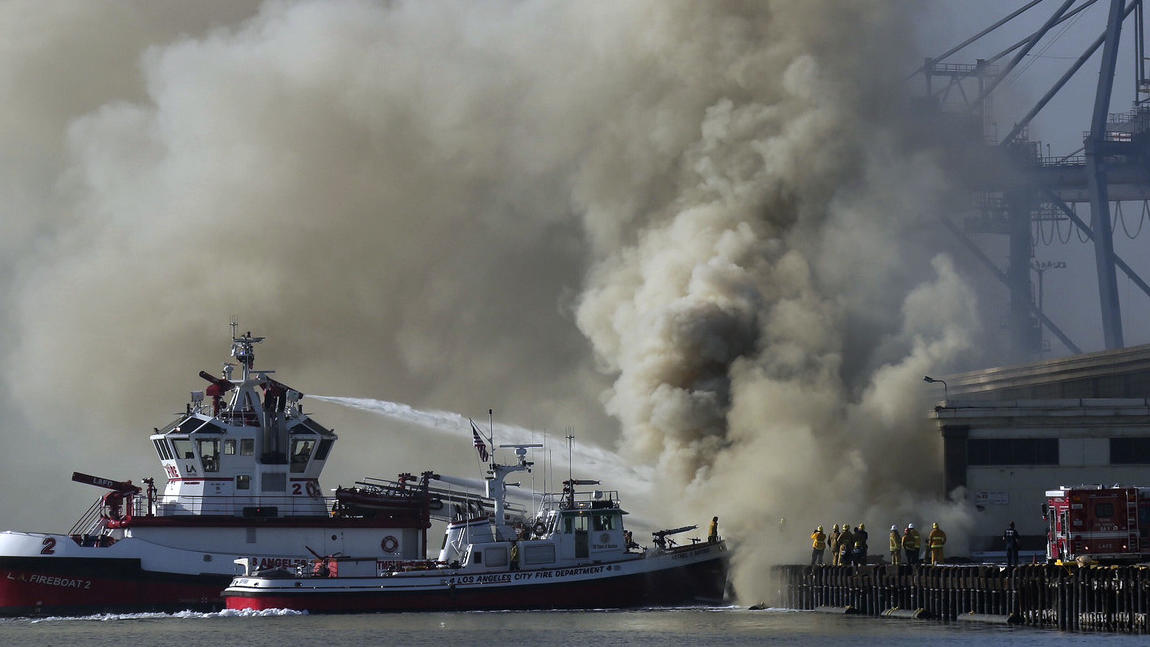 Irfan Khan / Los Angeles Times
A plume rises from a stubborn fire at the Port of Los Angeles that continues to burn World War II-era lumber pylons soaked in creosote, prompting air quality concerns Tuesday.
Some parents arrived wearing protective masks as they picked up their children.
“They should have just closed the school because of the toxic fumes,” Leti Valencia said as she waited to pick up her child.
The late Monday fire was the worst at the port since 1976, when the oil tanker Sansinena exploded while being refueled, tearing the ship in half, destroying buildings, killing nine people, injuring dozens more and shattering windows miles away.
This week’s fire erupted as welders were working on the docks and quickly swallowed up the huge wharf at Berths 177 and 178.
At a news conference, Los Angeles Fire Chief Ralph Terrazas said that when the fire was contained, it was 800 feet by 50 feet.
Because the ancient wood on the wharf had been treated with creosote, it burned furiously and was resistant to initial firefighting efforts.
The flames threatened cargo ships and a nearby warehouse. Hundreds of workers at the terminal were evacuated, air quality advisories were quickly issued and ships scheduled to dock were rerouted.
Firefighters used bulldozers and jackhammers to cut trenches to hold back the fire, and Los Angeles Fire Department divers used hose lines to fight the flames and burning wood from the water. A powerful fireboat capable of shooting up to 40,000 gallons of water per minute was used to blast the smoldering docks.
“The wharf created significant challenges for us,” Terrazas said.
Councilman Joe Buscaino, whose district includes the port and Wilmington area, said he was impressed by the efforts of firefighters. “Twenty years ago,” he said, “this thing would have still been in flames.”
Smoke and toxic soot from the burning creosote forced the evacuation of at least one elementary school Tuesday afternoon.
Los Angeles fire officials had initially recommended that, as a precaution, two Wilmington elementary schools — St. Peter-St. Paul and De La Torre Jr. — be closed for the day.
But L.A. Unified officials opted to keep De La Torre Jr. open, saying in an email to parents that they had determined toxic smoke from the wharf posed “no threat to the health of students or staff at the school.”
School officials did, though, order windows and doors remain shut to keep out the smoke.
Michaela Garcia, 38, and her husband were among the concerned parents picking up their children.
“It just seems to me the superintendent doesn’t care about the students,” said Garcia, whose 9-year-old son attends the school. “My son suffers from asthma.”
Parents, some wearing blue and white masks, arrived at the school to pull their children from campus. Some children wore masks or used their hands to cover their mouths and noses as they made their way out.
Later in the day, when the wind shifted, bathing the neighborhood in smoke, students were moved to a nearby high school in San Pedro.
City and fire officials tried to reassure residents that the air-filtering systems at the schools were better than those in some homes. Tests were underway to determine what type of toxic fumes had been released. Officials did say they found elevated levels of naphthalene, a chemical most often used for mothballs.
No injuries have been reported as a result of the fire.
Opinions expressed in this blog are those of the author, and do not necessarily represent the positions of the Moving Forward Network or its members. All errors are the responsibility of the author.