It would also mean 1.3 mile-long trains full of propane passing through Portland every other day. Up to 30 million gallons would be stored on site. And massive tankers full of the fuel would transit the Columbia River two or three times a month.

The Oregonian talked Friday to Calgary-based Pembina’s Chief Executive Officer, Mick Dilger, who provided some of the first real details on the project since it was announced nearly two weeks ago.

(The following exchange was edited for length and clarity.) 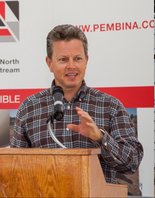 Q: Why Portland?
A: We’ve been surveying locations for some time. When we first contacted Portland, it wasn’t apparent that there were any spaces available. We didn’t need a lot of space because we’re not storing a lot of product. When we clarified our need, the Port realized it had a perfect spot, a long and narrow parcel where you couldn’t store anything else. The Port is great, it’s very business like. We like the dual connectivity in terms of rail. About a quarter of all Port exports are Canadian, so we’re drawing the same conclusion as a lot of other industry participants in Canada that it’s a good port for Canadian exports

Is this a done deal or are you still talking with other communities?
In terms of making a deal on lease terms, we have a deal. In terms of the overall process, our deal is contingent on getting various approvals. If we can’t get through that or if it turns out the people of Portland don’t want this, we don’t have a deal.

This is Pembina’s first propane export facility, so your track record and experience is limited?
The mirror image of what we’re building, which is essentially tanks and loading facilities, we’ve been doing for 25 years. The only thing we haven’t done is load ships, but it’s essentially the same as loading rail cars, so I would say we’ve been doing this a long time.

So this is a $500 million investment in total?
That’s what it would take to get it going. It could grow if we’re all fortunate enough to expand it some day.
Export capacity of 36,000 barrels a day is pretty small, right?
For us it’s right-sized. On a world scale, we view it as being smallish. We really couldn’t go much smaller and make the economics work. Growing it will be dependent on our ability to capture additional supply. The natural gas liquids come from all over Alberta. Another reason we like Portland is that it’s proximate to other gas basins in the U.S.  We would love to see this double in supply, but our high blue sky case would be that it would get to 72,000 barrels a day.

How many railcars a day would the initial proposal involve?
A standard unit train of about 100 railcars every second day, about 7,000 feet in length (1.33 miles). Trains with a single product get preferential treatment, whisked though to their destination far more quickly, so there’s a big advantage in transportation costs and efficiency of using a unit train.

How many ships would call on Portland? How big?
They’re referred to as VLGCs. (Very large gas carriers. About 750-feet long. More than 20 million-gallon capacity) There would be two to three ships a month.

What are the safety exclusion zones around the ships? Could that disrupt other river traffic?
We’re currently estimated the exclusion zone would be 650 to 800 feet on either side of the vessel. That would not affect traffic on the river. It would affect the shoreline.

Please explain. Exclusion zones for LNG vessels affect other vessels.
I don’t know the answer to that. We’ll ask our regulatory folks.

Describe the facility you plan to build.
There are two big refrigerated tanks. Pressurized. We have to keep the propane at minus 40 fahrenheit. Rail offloading, with a short pipeline from the tanks to the loading facility. It’s better described as piping, not a pipeline. It’s all contained within our lease area there.

What is the tank capacity. Are they full containment vessels?
We haven’t finalized the tank design. We’re aware you have new earthquake standards so we’re going to incorporate that into our design. It will be between 600,000 and 700,000 barrels of storage (up to 30 million gallons).
But everything we have meets or exceeds containment standards. If there’s a leak it will vent into the atmosphere. Propane is not toxic or harmful to the environment. It’s not really even considered a greenhouse gas.
(Propane does produce greenhouse has when combusted. The company clarified that the tanks would be double-walled, full containment tanks — eds)

Pembina and the Port have both stressed that this is not liquefied natural gas. Are you suggesting this is safer than LNG?

What we’re trying to highlight is that people know what propane is. Pembina is not in the LNG business. Everyone has a propane tank on their barbecue or on their boat and it doesn’t scare them. You don’t say to your kids, ‘Don’t go in the backyard because there’s a barbecue there.’ We think that’s an important point to get out.

My understanding is that propane is more hazardous than methane. It is transported under pressure. It is heavier than air, so it can accumulate and persist longer if there’s a leak. It ignites at much lower concentrations and temperatures and has more stored energy than methane, so it’s subject to high-order explosions. Accidents are rare, but that still doesn’t sound safer than LNG.
We’re not trying to draw a distinction between one facility and the other. They’re both very safe fuels. We have great familiarity and a great track record with both (methane and propane). Our tanks are not near anybody directly. We’ll have state of the art leak-detection, 24-hour manned facility. All the precautions. Given where we are, I don’t see it as any more risky than having a propane tank next to your barbecue.

There have been several railroad fires involving propane in the last year… How can Oregonians be assured that won’t happen here?
I can’t speak to those specifics. We don’t have any older, DOT-111  cars. All our cars are newer DOT-112 cars… We’ve gotten all safe  handling awards from BNSF for thirteen years in a row, from CN for nine years in a row.
From a commercial standpoint, if we’re not good at this, our business would suffer greatly. Getting propane to market safely is the lifeblood of our business.
We’ve been doing this for around 25 years. I’m not aware of any kind of suit or issue ever brought against the company for improperly loading.

The Rivergate district is a flood plain that geologists say is subject to catastrophic ground movement in an earthquake greater than 6.0 magnitude. How would this facility be constructed to mitigate such risks?
I’m an accountant, not an engineer. I’m not trying to duck the question. But I believe what you’re talking about should be able to be solved by the civil engineers. If it can’t, we won’t be building there.

What kind of specialized public safety facilities or equipment are necessary and who would pay for them?
I don’t know. We use foam systems in some of our oil tank farms. It would be a rounding error in terms of the total investment, so to me it would be a no brainer that we would pursue that.

Pembina won’t be getting any subsidies?
We’re not going to be asking for anything. We’re sensitive that Canadian propane is going through the U.S. We don’t want to start a dialogue around the city of Portland subsidizing a Canadian company. We want people to say this is all good, that we’re getting the jobs, the investment, the taxes. Whatever benefits we could get, we don’t think that dialogue is worth having.
Can you give me a sense of the emissions profile for one of these facilities, or the lifecycle emissions of exporting propane?
We haven’t done the studies. We’re still trying to grab hold of all the permitting and environmental stuff we’ll have to do. There’s obviously a lot of things we still need to learn and a lot of stakeholders we need to talk to, finding out what these issues are and if we can tackle them.

Exactly what approvals do you need?
The Port knows the approvals better than we do. When we learn that definitively, whatever is required, we’ll do. We’re not a company that tries to sneak in. We’re proud of what we do. We’ll hang it out there and if Portland wants this, we’ll be there and if they don’t we won’t be.

For all the stakeholders, I can assure you we’ll be very forthcoming. We’re going to take the time to make sure they can get their heads around this.
– Ted Sickinger