The Riverport Development is a proposed 5100 acre rail-served logistics facility to be located in Jasper County, South Carolina, just 6.5 miles from the Port of Savannah and 8 miles from the proposed Jasper Ocean Terminal.  It will have 1400 acres dedicated to warehousing, distribution, and light manufacturing, and huge tax credits and other government incentives. Developers plan 15 million square feet of warehousing.

An EIS scoping meeting was announced in the July 31 Statement of Intent to Develop a Draft Environmental Impact Statement.

The newspaper article below has summary information on the scoping meeting. 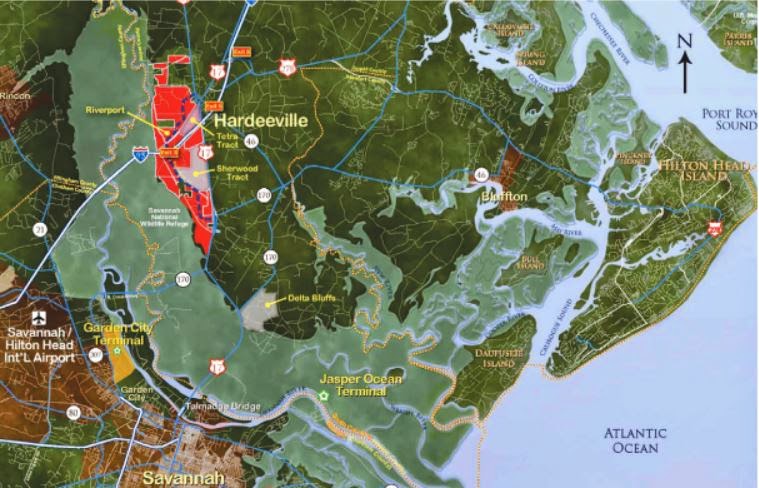 RiverPort to get environmental-impact statement

99 cent digital subscription to savannahnow.com
Subscriber-members get access to ALL our digital products AND become eligible for free event tickets, discount coupons and other benefits.

By SARITA CHOUREY
Plans for what has been called one of the largest future logistics and industrial sites in the Southeast are entering a new phase.
The Charleston District, U.S Army Corps of Engineers is getting ready to prepare a draft environmental impact statement on the project. It will also include the proposed Interstate 95 interchange for Exit 3. The Corps has approved contractor Michael Baker Jr., Inc. to prepare the environmental impact statement for the project, slated for land west of U.S. 17.
The proposal, which is for a 5,100-acre tract, is from Stratford Land, the city of Hardeeville, and Jasper County. Officials anticipate the entire development will supply 24,000 permanent jobs by year 30.
With the sensitive Savannah National Wildlife Refuge just west of the site, the EIS will have plenty to consider.
According to the Corps, that includes everything from roadways and railways, to noise, light, environmental justice, socioeconomics, water quality, and hazardous waste and materials.
RiverPort will consist of a 1,755-acre business park, 840-acre commercial village, and 2,390-acre mixed use village made up of residential and commercial space, according to Corps materials.
“It will handle some of the increased container traffic into the Savannah port resulting from the introduction of the significantly larger post-Panamax Canal ships,” states the Corps’ public notice about the project on Thursday.
In recent years, Jasper County’s business and government leaders have pressed the case for RiverPort investment at the S.C. State House during the annual Jasper County Chamber of Commerce lawn luncheon.
The draft environmental impact statement is one of the initial steps toward the ultimate “record of decision” to be issued by the Corps on the project.
HOW TO BE HEARD ON THE FUTURE RIVERPORT:
Who: Members of the public
What: There will be a “public scoping meeting” at Hardeeville City Hall.
When: Open house from 6-7 p.m., followed by a formal meeting at 7 p.m., on Tuesday, August 19.
Where: Hardeeville City Hall; 205 East Main St., Hardeeville, S.C. 29927. The open house will be held in the City Council Chambers. The formal meeting will be held in the Community Room.
Why: The purpose of the public scoping meeting is for the public and interested parties to give the Corps input on the range of issues to be addressed in the environmental impact statement, in order to identify the development’s potential social, economic, and environmental impacts. It’s also intended to identify any possible alternatives to the project. The Corps says it’s not considered to be a public hearing and should not be used to voice broad-ranging opinions for or against RiverPort.
Additional: Officials will accept written public comments until September 19. Those should be sent to: U.S. Army Corps of Engineers, Charleston District; c/o Shawn Boone, Project Manager; 69-A Hagood Ave.; Charleston, S.C. 29403
Website: www.riverport-exit3eis.com
Opinions expressed in this blog are those of the author, and do not necessarily represent the positions of the Moving Forward Network or its members. All errors are the responsibility of the author.