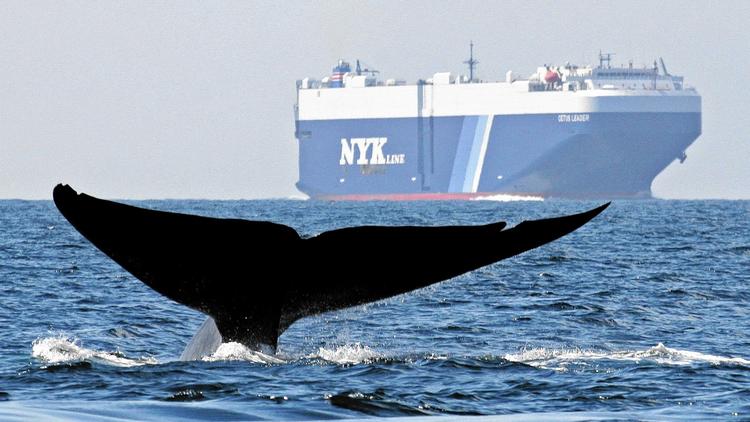 A blue whale and a cargo ship pass through the Santa Barbara Channel. A test program aims to reduce collisions. (John Calambokidis, Associated Press)
A pilot program starting this summer will tackle two environmental problems posed by thousands of cargo ships that use the ports of Los Angeles and Long Beach each year: The hulking vessels are major sources of air pollution and the shipping lanes overlap with a prime feeding area for migrating blue whales off Santa Barbara.
Under a voluntary initiative, ship operators will be compensated for slowing as they travel through the Santa Barbara Channel.
Shippers will be paid $2,500 for each trip completed at 12 knots or slower through a 130-mile stretch from Point Conception to the Los Angeles-Long Beach port complex, where 4,474 ships docked last year. The funds will come from the Santa Barbara County Air Pollution Control District and the Santa Barbara Foundation, a civic nonprofit organization.Ship strikes have killed dozens of endangered blue, humpback and fin whales over the last 10 to 15 years and air quality officials say pollution from offshore vessels accounts for more than half the emissions of smog-forming nitrogen oxides in Santa Barbara County.
The slower speed will add about four hours to typical voyages by container ships, which usually cruise at 14 to 18 knots. Slower trips are expected to lower the risk of fatal collisions and give whales more time to swim away from approaching ships. As an added benefit, the vessels’ enormous engines will emit less air pollution.
“When you slow ships down you provide whale conservation and cleaner air for us to breathe here on shore,” said Kristi Birney, marine conservation analyst for the Santa Barbara-based Environmental Defense Center, one of the backers of the initiative.
T.L. Garrett, vice president of the Pacific Merchant Shipping Assn., an industry group, said the $2,500 payments “don’t really come close to covering the additional cost or risk that they’re incurring by slowing down. They’re doing it because they’re trying to exhaust all measures possible to both enhance protection of whales in the Santa Barbara Channel and to improve air quality.”
Six global shipping companies are participating in the trial program, which will pay for 16 low-speed trips through the Santa Barbara Channel through the end of October.
The season coincides with the peak of blue whale feeding in the channel and the time of year when Southern California sees its highest concentrations of ozone, the lung-damaging ingredient of smog.
Ships are known to collide with and kill several whales each year off California, according to federal wildlife officials. But the actual number of whale strikes is probably much higher because many of the incidents go unnoticed or unreported and the carcasses drift away or sink into the ocean.
The deaths became a high-profile issue in 2007, when at least four blue whales were killed by strikes in the Santa Barbara Channel in just a few weeks. That prompted federal wildlife authorities to start issuing notices asking large vessels to slow down when whales are spotted in the area.
The program off Santa Barbara is modeled after successful pollution-cutting measures at the ports of Los Angeles and Long Beach in which shipping firms receive financial incentives if their vessels slow down as they approach or leave port.
About 1,474 ships arrived at the ports through the Santa Barbara Channel last year, according to the Marine Exchange of Southern California, a nonprofit organization that tracks vessel traffic.
A recent study by UC Riverside scientists found emissions of nitrogen oxides and carbon dioxide dropped by more than 50% when ocean-going vessels reduced their speed to 12 knots.
Backers of the program said the trial period will help them evaluate the effects of speed reduction on air quality and whales, and to test the shipping industry’s willingness to participate before embarking on a larger-scale plan.
In 2011, the Environmental Defense Center and other advocacy groups unsuccessfully petitioned the Obama administration to force shippers to reduce their speed through California’s four national marine sanctuaries to protect whales.
“Now we’re seeing if we can come to an innovative, collaborative solution before taking another path,” Birney said.
The pilot program will be administered by the National Marine Sanctuary Foundation.
Last year the Coast Guard moved the southbound shipping lane through the Santa Barbara Channel a mile closer to shore to avoid the area with the highest concentration of whales. But even with the new configuration, experts say, whales remain at risk of being hit by ships.
tony.barboza@latimes.com
Twitter: @tonybarboza
Opinions expressed in this blog are those of the author, and do not necessarily represent the positions of the Moving Forward Network or its members. All errors are the responsibility of the author.