The BNSF railroad and Arch Coal have proposed a new 42 mile rail line, the Tongue River Railroad, which would allow coal to be exported from coal mines near the Wyoming-Montana border to the West Coast for export to China.

The Northern Plains Resource Council and other groups have fought this and similar coal railroad proposals for over 30 years.  This proposed railroad also concerns groups focused on the global warming effects of burning coal, especially in dirty Chinese coal plants.

Last week, the Surface Transportation Board announced the draft Environmental Impact Statement will be delayed, due to “intense public interest”. 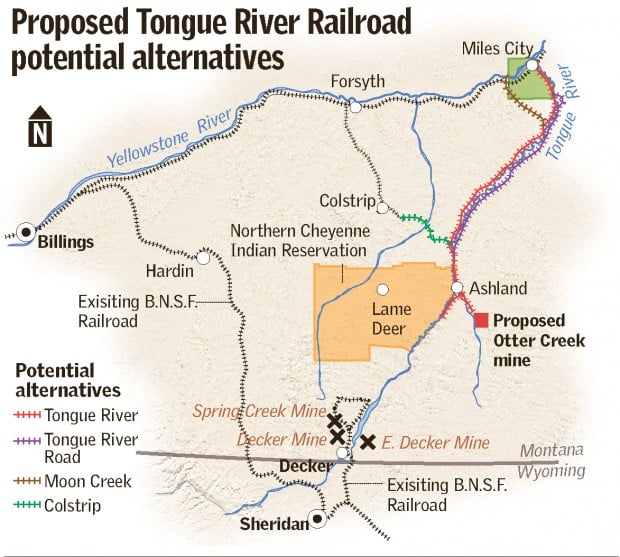 LARRY MAYER/Gazette Staff
July 19, 2014 1:00 pm  •  By MATTHEW BROWN Associated Press
BILLINGS — U.S. coal industry efforts to tap into the growing export market are struggling to gain traction, as bureaucratic hurdles and resistance from environmentalists slow proposed mines in the Northern Plains, ports on the West Coast and now a coal-dedicated railroad in Montana.
The Surface Transportation Board said Friday it will take until next April to complete its draft analysis of the Tongue River Railroad. That’s the second significant delay in work originally scheduled for completion last year.
The $403 million line sponsored by BNSF Railway and Arch Coal would open the door to new mines in the Powder River Basin along the Montana-Wyoming border. The basin is home to one of the largest coal reserves in the world and provides the bulk of the fuel consumed in the U.S.
Surface Transportation Board spokesman Dennis Watson said the decision to bump back the schedule on the railroad study was made to accommodate the “intense interest” in the project. The additional time will “give everybody a chance to make their views known,” he said.
Coal companies want to move more of their product to Asia markets as domestic demand wanes due to stricter pollution restrictions and competition from cheap natural gas.
The quickest route is through the West Coast. Yet despite modest growth in recent months, West Coast export volumes remain severely constrained by limited port capacity.
Elected officials in Washington and Oregon and environmentalists have opposed proposals to sharply expand that capacity, and several projects have been scrapped or stalled. That has direct bearing on several projects in the Powder River Basin, including southeastern Montana’s Tongue River Railroad.
Concerns have previously been raised about the railroad’s potential negative impacts on farmers and ranchers and American Indian cultural sites in the area.
BNSF spokesman Matt Jones said the railroad’s sponsors still were targeting completion of the line by the time Arch’s proposed Otter Creek Coal Mine is ready to ship coal.
But the timing of that, too, is uncertain.
Otter Creek, located near Ashland, Montana, is the site of a 1.4 billion ton reserve that would become the railroad’s main customer.
It already has fallen more than two years behind its original permitting schedule. Company executives once predicted Otter Creek could open next year. It’s now likely years away given the time it would take to develop the mine.
Just a few years ago, the industry’s export aspirations appeared to be coming to fruition, with record volumes being shipped out of U.S. ports. But that rate of increase has since stalled, and projections from the U.S. Department of Energy and others show modest or even negative coal exports growth over the next decade.
Railroad opponents assert that long-term trends are stacked against coal and the Tongue River Railroad, as the U.S. and other governments take steps to reduce gas pollution from power plants that use the fuel.
“I’m no expert, but it seems like there’s not going to be a whole lot of money to be made in coal. Maybe the big investors are realizing it’s not a good idea,” said Mark Fix, a rancher along the Tongue River whose land would be bisected by one of the railroad route alternatives that is under consideration by the federal transportation board.
Opinions expressed in this blog are those of the author, and do not necessarily represent the positions of the Moving Forward Network or its members. All errors are the responsibility of the author.