Few oil operations are more dangerous than transloading. Oregon state regulators say the Clatskanie oil terminal, operated by Global Partners, committed the “highest level violation of state environmental rules” when they and the BNSF railroad transported hundreds of millions of gallons of crude oil along the Columbia River.

For more information, check out the press release below and the MFN Clatskanie Oil Terminal Collection.

For an index of MFN Resource Collections, please visit https://www.movingforwardnetwork.com/p/resource-collections.html 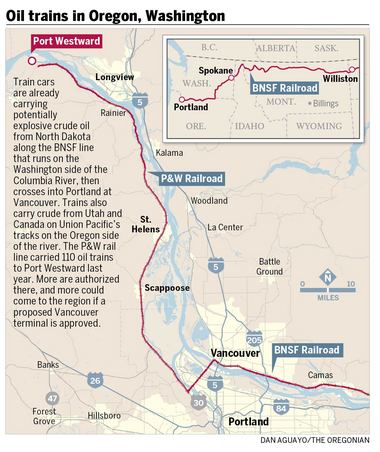 July 2, 2014
Portland, Oregon:
Today, conservation groups filed a lawsuit asking a federal court to require a Columbia River crude oil transport terminal to comply with federal laws meant to protect people and the environment from air pollution. The former ethanol production facility in Clatskanie, OR, has been quietly transformed into a terminal for the transport of millions of gallons of highly explosive Bakken crude oil.
Today’s lawsuit charges Cascade Kelly Holdings and its owner, Global Partners LP, with trying to skirt Clean Air Act protections and avoid strict federal permit requirements while converting a bankrupt ethanol facility, constructed with tax dollars, into a high-volume Columbia River shipping terminal for extremely volatile crude oil.
“Global Partners and Cascade Kelly are trying to game the system and use a facility permitted for ethanol production to ship dangerous crude oil through our backyards without telling the public, doing the proper analysis, or having proper Clean Air Act pollution controls,” said Marla Nelson with Northwest Environmental Defense Center.
The offloading of crude from trains to tanks and then barges at the terminal emits large quantities of volatile organic compounds and other air pollutants harmful to human health and the environment. The suit seeks penalties and a court order requiring Cascade and Global to cease operations at the oil terminal until they obtain the appropriate Clean Air Act permit.
“We cannot allow these companies to skirt the requirements of one of our most important and longstanding protections for communities faced with dangerous industrial pollution,” said Janette Brimmer of Earthjustice, which is representing the organizations. “This legal action ensures that everyone follows the law, not least, oil companies that seek to profit by shipping dangerous products across our treasured landscapes and neighborhoods.”
Global has been moving dangerous, highly-volatile Bakken crude oil from North Dakota on trains (prone to explosion and fire) through the Columbia River Gorge, Portland, and other towns to the Clatskanie terminal at a rate of 300 million gallons in 2013, with no federal permit controls. Global intends to move at least 10 times more oil than that in the near future.
“Transporting volatile Bakken crude by rail and ship along the Columbia River is like playing a dangerous game of environmental roulette with our health and our environment,” said Tanya Sanerib, an attorney with the Center for Biological Diversity. “We want the terminal shut down until we can be sure that people, wildlife and habitat are safe.”
The dangers of transporting Bakken crude oil by train have become painfully obvious to numerous communities over the last year:
“Our organization works very hard to ensure that Portland residents and surrounding communities are protected from the effects of harmful air pollution,” stated John Krallman of Neighbors for Clean Air. “We seek to ensure that companies like Cascade and Global are not allowed to circumvent the law to the detriment of public health and safety.”
Cascade and Global have already run into trouble with the Oregon Department of Environmental Quality. Using the ethanol facility permit, the companies asked for a “simple technical modification” to the permit to allow the receipt of a small amount of oil. Instead, the companies quickly converted it into a full oil-shipping terminal, exceeding the small amount of oil allowed by the “simple modification” by six times, resulting in Oregon DEQ issuing a penalty order against them.
Read the court filing.
Opinions expressed in this blog are those of the author, and do not necessarily represent the positions of the Moving Forward Network or its members. All errors are the responsibility of the author.