Keystone XL Pipeline May Be Replaced by Crude by Rail Link to Southern Keystone Pipeline, Source of Increased Safety Concerns

Last week,  TransCanada announced that it may use rail to replace the unapproved Keystone Xl Pipeline.  TransCanada is considering shipping crude Bakaan shale oil from their oil hub in Hardisty, Alberta to Steele City, Nebraska by rail, where it would be transferred into existing Keystone pipelines to Port Arthur, Texas for refining.  According to reports, the project would require a rail-pipeline transfer facility at Steel City. 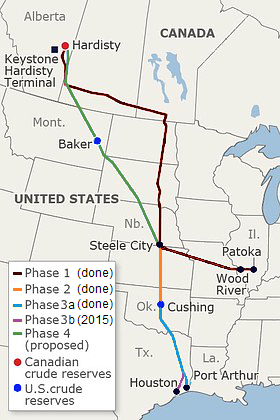 Yesterday, the Associated Press reported that the U.S. government placed additional conditions on the Keystone XL pipeline due to safety concerns over poor construction practices on the southern leg of the pipeline – which would receive additional oil if this new plan is implemented.

As reported by the A.P.

The weld failure rates are “horrible,” said Robert Bea, professor emeritus of civil and environmental engineering at the University of California, Berkeley. “The level of defects is indeed cause for alarm and indicative of something that is going on in the Keystone organization that isn’t satisfactory.

If implemented, this plan would have a huge impact on rail traffic between Nebraska and Oklahoma.  Keystone projects it would require 1200 to 1300 trains per day to carry approximately 400,000 barrels, about half of the capacity of the proposed Keystone XL pipeline.

CRUDE OIL BY RAIL: POTENTIAL FOR THE MOVEMENT OF ALBERTA
OIL SANDS CRUDE OIL AND RELATED PRODUCTS
BY CANADIAN RAILWAYS