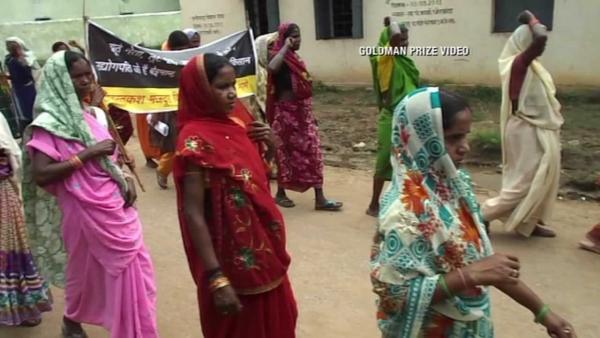 SAN FRANCISCO (KGO) — The Goldman Environmental Prize, known by many as the green Nobel Prize, was handed out Monday night in San Francisco. This is the 25th anniversary of the prestigious prize that goes to six winners around the world. They are grass roots activists chosen by an international jury for exceptional work to protect the environment. One of the biggest benefits of winning the Goldman Prize is the chance to bring international attention to critical issues.

Winner Rudi Putra is from Indonesia. He was trying to save the endangered Sumatran Rhino, and ended up fighting for an entire eco-system. Putra campaigned to shut down illegal palm oil plantations that are destroying pristine rainforests. Putra organized teams to find, report and remove the palms so the forest could grow back — a big victory that created an important corridor for wildlife moving through the area.
Putra says he is happy, but it’s not enough yet. A key strategy for him and all the winners is making sure local communities understand the issues.

Prize winner Desmond D’Sa of South Africa is working to fight what he calls environmental racism. He was one of many black people forcibly relocated under apartheid to work in refineries and chemical plants in South Durban, where heavy pollution is creating major health concerns.

D’Sa led an intensive effort to learn about the chemicals causing problems. He even got help from the Bay Area. An organization called Global Community Monitor in Richmond gave D’Sa the scientific tools to find out which pollutants are in the air.

“It’s very simple, very easy; if you smell odors, you can use the bucket system and go there and take a sample,” D’Sa said. “[It takes] 14 minutes and then you ship the sample all the way to California.”

In India, Ramesh Agrawal won the Goldman Prize for fighting corruption in the coal industry in the Chhattisgarh area which has been ravaged by pollution. Agrawal used his small Internet cafe to launch a massive information campaign and file legal claims.

He was thrown in jail on fake charges, and shot after he was released. Agrawal is still recovering -and says the Goldman Prize gives him the will to keep going.
Ruth Buendia is using the power of information to help indigenous people known as the Ashaninka in Peru. They are fighting huge hydro-electric dams proposed for the Amazon. Buendia’s Goldman Prize winning work has stopped at least two dams for now and she is trying to get permanent land rights for the Ashankika people.

In Russia, Suren Gazaryan is a bat researcher turned activist. He found out elite government officials were seizing public land to build their own homes and luxury resorts. Gazaryan led a campaign to stop them and create a protected nature reserve. He won the Goldman Environmental Prize, but had to flee Russia and is now living in exile.

The American prize winner is Helen Slottje. Slottje is a former corporate lawyer who was disturbed when she learned oil and gas companies were going to start fracking operations in upstate New York and local communities were not getting a voice in the decision making.

Slottje and her husband found a legal clause that allows towns to use zoning laws to stop companies from setting up huge fracking operations. Two-hundredNew York communities have now enacted some kind of limits on fracking. Slottje is talking with Californians about using a similar strategy here, in part because fracking uses a huge amount of water.

“In California, the traditional water fights are between fish and farmers, and now you have to add fracking,” she said. “So it’s fish, farming and fracking, and those are only going to be increasingly tough decisions to make.”
This year the Goldman Environmental Prize was raised, with each winner receiving $175,000.

Written and produced by Jennifer Olney