Last week, in the blog post Ditch Dirty Diesel to Improve Public Health, we shared the argument that reducing diesel exhaust particulate matter will not only improve public health – it is the fastest way to slow global warming.

Though some mainstream organizations and philanthropic organizations haven’t yet shifted their focus, an increasing number of scientists and organizations are making that case – and have the data to back it up. 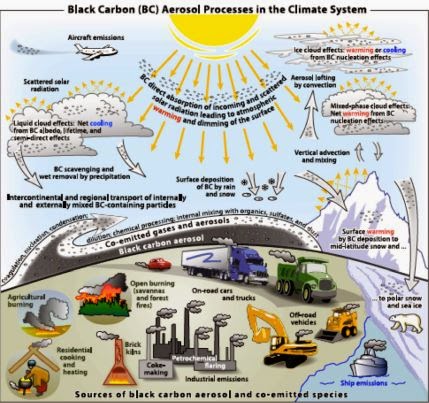 Source: Bounding the role of black carbon in the climate system: A scientific assessment

Writing in Black carbon larger cause of climate change than previously assessed, Piers Forster, co-author of an influential 2013 study on black carbon, wrote:

Reducing emissions from diesel engines and domestic wood and coal fires is a no brainer, as there are tandem health and climate benefits. If we did everything we could to reduce these emissions we could buy ourselves up to half a degree less warming–or a couple of decades of respite..

T.C. Bond and others concluded in Bounding the role of black carbon in the climate system: A
scientiﬁc assessment:

Mitigation of diesel-engine sources appears to offer the most confidence in reducing near-term climate forcing.

Next Big Future wrote on Friday, March 28 (emphasis mine)

Fixing air pollution is one of the quickest ways to save the most lives at the lowest cost and the fastest way to reduce global warming. If someone were seriously concerned about global warming then particulates and soot should be the first and primary focus because it would have the biggest and fastest impact. Carbon dioxide mitigation costs 20 times more and takes decades longer to bend the temperature curve.

Question: Is your organization emphasizing the twin benefits of reducing diesel exhaust particulate matter, and the necessity of doing if as rapidly as possible?
Opinions expressed in this blog are those of the author, and do not necessarily represent the positions of the Moving Forward Network or its members. All errors are the responsibility of the author.