It’s a rare day when the one or more of the people who built the Moving Forward Network aren’t covered by the media while fighting for environmental justice.

This week was kicked off with our friends Ana Baptista, Nicky Sheats, and others educating students and the public at an EJ event put on by The Citizens Campaign at Rutgers University.

Keep up the great work!!

With thanks to the Daily Targum for excellent reporting! 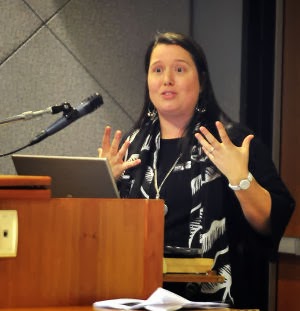 America’s dirty little secret is environmental injustice, said Ana Baptista, director of environmental and planning programs for the Ironbound Community Corporation.
Baptista gave the keynote address at yesterday’s Environmental Justice, Advocacy and the Media conference, hosted by The Citizens Campaign at Alexander Library on the College Avenue campus.
Heather Taylor, senior director of Communications and Public Affairs for The Citizens Campaign, said the organization is nonprofit and nonpartisan and aims to empower everyday people to change the political climate.
Taylor, a Rutgers alumna, believes people often have the misconception that citizens cannot make a difference or think the problem is too big for an individual to solve.
“Citizens have the power to improve their environment, they just need to the right tools and knowledge,” she said.
Baptista, who grew up in the Ironbound neighborhood of Newark, said low-income communities like Newark, Camden and Trenton have fallen victim to environmental injustice.
Those areas have disproportionately high amounts of pollution for many reasons, including the concentration of refineries and chemical companies in their communities.
“We make believe those places don’t exist so we don’t have to confront what those places tell us about the issues with our society,” she said.
It is shameful how a zip code can determine how long its residents live, Baptista said.
Part of the reason for this relates to America’s housing discrimination history and how public housing was built in this country.
Until recent years, a person’s race determined where they could purchase a house, raise children and send their children to schools.
It took 200 years of state action to develop these racialized communities, so it will not be easy to recognize those patterns and undo these actions to get to the heart of environmental justice, she said.
Citizens and communities must align themselves together to encourage the formation of citizen advisory groups as well as work to devise and push innovative legislation to encourage environmental justice.
“Places like Newark do not exist without places like Short Hills,” Baptista said.
The New Jersey Environmental Protection Agency has decided to invite community, non-profit and industry stakeholders to settle their differences and come up with a set of recommendations to improve environmental laws.
This process involved monthly, full-day meetings in Trenton, N.J. Usually only one or two community group representatives volunteer their time to attend the meetings, as opposed to five or six industry members who are hired to attend.
Additionally, Baptista explained that different levels of access to information and resources lead to a further power imbalance.
While the EPA is making an effort, it has created a process that looks fair at face value, but is not truly democratic.
Taylor emphasized the importance of media coverage in environmental injustice, and she said citizens could take part in their communities as community legislators, leaders and journalists.
Knowledge is power — someone needs to tell the story in an accurate and thorough fashion, and citizen journalists can frame the environmental issues in the larger context of their implications.
In a panel, Nicky Sheats, director of the Center for the Urban Environment at Thomas Edison State College, spoke about fine particulate matter in air pollution.
He said some airborne particles are small enough to penetrate deep into a person’s lungs and kill them.
These fine PM air particles cause 200,000 premature deaths every year. They are emitted from smokestacks and the diesel engines in trucks and buses.
Sheats noted these particulates are found in disproportionately high amounts in low-income black communities.
Andrew Kricun, executive director and chief engineer of the Camden County Municipal Utilities Authority, talked about wastewater management and discussed how the Camden County Municipal Utilities Authority has worked to improve the wastewater treatment plant in one of the nation’s poorest cities.
The plant, which serves 500,000 residents, lies just 100 yards from a residential neighborhood. For many years, the plant emitted a disturbing odor to the nearby community.
The CCMUA installed more than $50 million of new odor control systems and instituted a zero-tolerance policy with respect to odors.
The organization also formed Camden Stormwater Management and Resource Training, or Camden SMART, to reduce flooding in the city, because with every rainfall, sewage backs up into Camden’s streets and parks.
Robert Spiegel, executive director of the Edison Wetlands Association, said environmental justice is not just an idea, but also a 20-year-old Executive Order.
Former President Bill Clinton signed the order because he recognized environmental justice for low-income communities was falling short of the ideals of freedom and equity held by the founding fathers.
“Everyone should breathe clean air, drink clean water,” he said.
He discussed the communities of Ringwood and Long Branch, both of which are designated as environmental justice communities.
The citizens of Long Branch worked together and collaborate with the Edison Wetlands Association to deal with environmental issues, and received $200,000 in resources to address them.
Taylor said the conference brought together passionate activists trying to shine a spotlight on the environmental challenges that face the nation’s towns and cities.
“We hope participants will learn how to effectively educate the public and elected officials about the environmental challenges our cities and towns face as well as how to advance constructive solutions,” she said.
Opinions expressed in this blog are those of the author, and do not necessarily represent the positions of the Moving Forward Network or its members. All errors are the responsibility of the author.