Public Citizen has released a strong indictment of TransCanada’s pipeline construction in the US.  I urge you to take a few minutes and check out what their field surveys found.  Their recommendations:

“The government should investigate, and shouldn’t let crude flow until that is done,” said Tom “Smitty” Smith, director of Public Citizen’s Texas office. “Given the stakes—the potential for a catastrophic spill of hazardous crude along a pipeline that traverses hundreds of streams and rivers and comes within a few miles of some towns and cities—it would be irresponsible to allow the pipeline to start operating.”

Public Citizen also urges President Obama and Secretary of State John Kerry, when deciding on the northern leg of Keystone XL, to consider TransCanada’s record of construction problems and code violations, and the pipeline’s potential impact on the sensitive areas of the Ogallala aquifer, which provides drinking water for millions of people, and the Sand Hills region of Nebraska, which the pipeline route crosses. 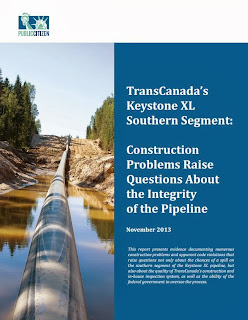