In the newly issued report, On Thin Ice, the World Bank has connected the dots between diesel exhaust pollution, environmental health, climate change. 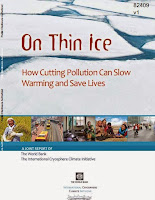 By reducing emissions from diesel transport we could avert yet another 340,000 premature deaths—while giving us some quick gains in our fight against climate change
A question for EPA and other Federal agencies – what can you do to reduce diesel emissions in the U.S., and how fast can you do it?

A few more quotes from ‘On Thin Ice’

“The health of people around the world will improve greatly if we reduce emissions of black carbon and methane. Limiting these emissions also will be an important contributor to the fight against climate change,” said Jim Yong Kim, President of the World Bank Group.

Reductions in emissions from diesel transport and equipment, meanwhile, could result in more than 16 million tons of additional yield in crops such as rice, soy and wheat, especially in Southeast Asia; and also avert 340,000 premature deaths.

Emissions of methane, as well as nitrogen oxide from diesel use, causes higher levels of ozone which results in lower growth of food crops, and thus a decrease in crop yields.