Increasingly, the call of environmentalists has been not just to ditch dirty diesel, but to stop burning fossil fuels.

Some investors are beginning to see a similar future…here’s a very interesting article from the Wall Street Journal’s MarketWatch blog.

Why Big Oil will shrink and its stocks tumble 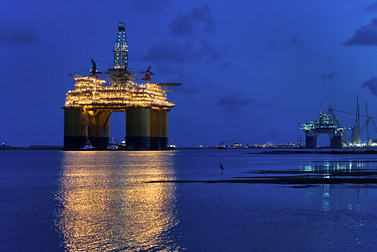 The Royal Dutch Shell Plc Olympus tension leg platform is seen at dawn as it sets sail from Kiewit Offshore Services in Ingleside, Texas, in July.

The Economist says “the day of the huge international oil company is drawing to a close.” Bottom line: Big Oil is “increasingly reliant on oil which is hard to get at: either because of geology (oil buried deep underwater and far from any shore); or because of chemistry (oil mixed up in tar sands and the like); or because of politics (oil in countries politically difficult to deal with).”
So oil giants are forced into “spending more and more money to produce less and less of global oil output.” In fact, they’re “now spending $100 billion a year between them on exploration and production. But this level of effort has not impressed investors.” Consultants Bain & Company, experts over at Seeking Alpha, Jim Cramer and others agree.
The Economist warns of Big Oil’s new global downsizing trend: “Spending heavily on replacing reserves to keep investors happy is not working,” with share prices hovering level. Costlier reserves “hardly counts as a long-term growth strategy.” Downsizing is the new trend: “Rather than push towards ever more esoteric frontiers, the supermajors might do better to slim down and turn away from the oil that they prize so highly but that the world may no longer want ever more of.”
And of course this has to be a bitter psychological pill for big egos like Exxon Mobil CEORex Tillerson, who makes $40 million a year running his Big Oil giant, so there will be big resistance.

This trend is evident in Steve Coll’s “Private Empire: Exxon Mobil & American Power,” reviewed by New York Times’ Dwight Gardner. Coll says Exxon is “a corporate state within the American state … one of the most powerful businesses ever produced by American capitalism.” Today its power is both apparent and brutal as Coll details “Exxon Mobil’s harassment of environmental scientists, its messy entanglements in small wars in far-flung countries, its withholding of information from Congress, its dissembling about global warming, its arrogant culture, its obscene stockpiles of cash.”
Big changes are coming, but for now Big Oil’s swagger and its willingness to do anything for profits is a clear indication it feels immune to public threats. Recently environmental activist Bill McKibben and many other climate-change leaders demanded the president reject the Keystone XL pipeline. Big Oil yawned. They’re “already building rail terminals to deliver oil from western Canada to the United States,” writes Clifford Krauss in the New York Times. Canada is quadrupling its rail capacity, protecting Big Oil’s $150 billion annual profits.
So our arrogant Big Oil thinks Keystone XL is old news. Just another cost of doing business in its endless war against climate change. Another: The recent derailment and explosion of a runaway oil train headed for a Canadian refinery, killing dozens in a small Quebec town, bankrupting the railroad. And still Big Oil believes it’s immune because we humans keep voting in favor of Big Oil every time we buy a new car or fill up at a gas station.
But not only are Big Oil’s investors disenchanted, across the planet public rage is growing. Worldwide, people are also disenchanted, rapidly awakening to the damage caused by fossil fuels, the source of Big Oil profits and power.
Yes, the world is coming out of denial, changing rapidly. Wake-up calls ring loudly. War drums roar. Climate-change battles are now a clear sign of Planet Earth’s final war, WWIII, exactly what the Bush Pentagon predicted for 2020 when “an ancient pattern of desperate, all-out wars over food, water, and energy supplies would emerge” and “warfare is defining human life” all over the planet.
And as we come out of denial, Big Oil’s armies will be the prime target for the mounting rage driving climate-change advocates, demanding regulation of carbon pollution, an economic revolution, downsizing and a selloff of Big Oil stocks.

In the next few years the counteroffensive against Exxon Mobil and Big Oil will get red hot, rapidly gaining stream, impacting stockholder profits. On the horizon, a gathering storm, several growing armies of climate-science activists are already massing for combat. Here are a few:
These efforts are guaranteed to snowball as the public becomes more aware of the irreparable damage being caused by Big Oil’s war against climate change and the environment. As awareness grows, it will become a more crucial matter of America’s economic and national defense policies as well as social issues, with more and more pension funds, institutions, corporations and mutual funds bowing to pressure.
And the political pressure will not just be fringe advocates like Greenpeace, but other traditional old-line ideological bastions of capitalism who will not simply mouth green policies but actively turn and join new leaders like former Treasury Secretary Paulson, who has served as the chairman of the global Nature Conservancy. Plus retiring Mayor Bloomberg who, when he announced the $20 billion plan to protect New York City from the next superstorm, said: “Whether you believe climate change is real or not is beside the point … The bottom line is, we can’t run the risk.”

Why the urgency? Because as environmentalist Bill McKibben warned in Foreign Policy magazine, “It may already be too late.” Jared Diamond, the prize-winning author of “Collapse: How Societies Choose to Survive of Fail,” warns: “Our world society is on a non-sustainable course” that will “limit our lifestyle within the next several decades.” He sees multiple climate-change problems that “are like time bombs with fuses of less than fifty years. If unsolved would do us great harm, because they all interact with each other … we need to solve them all.” Piecemeal solutions won’t save us from collapse.
Diamond’s ultimate warning: “The world’s environmental problems will get resolved, in one way or another within the lifetime of the children and young adults alive today…. The only question is whether they will become resolved in pleasant ways of our own choice, or in unpleasant ways not of our choice, such as warfare, genocide, starvation, disease epidemics, and collapses of societies.”
Yes, the climate wars will be resolved one way or the other. And yet, in spite of Diamond’s fear of “time bombs,” he’s a “cautious optimist.” World leaders need “the courage to practice long-term thinking, and to make bold, courageous, anticipatory decisions at a time when problems have become perceptible but before they reach crisis proportions.”
So now there’s a ray of hope and a new optimism with the entry of powerhouses like Bill McKibben’s global army of millions in 350.org, plus ICPP’s army of 2,000 global scientists, and now with the added commitment of the Steyer-Paulson-Bloomberg partnership … now hopefully we will see “bold, courageous, decisions” as the “time bombs” are defused.
Opinions expressed in this blog are those of the author, and do not necessarily represent the positions of the Moving Forward Network or its members. All errors are the responsibility of the author.