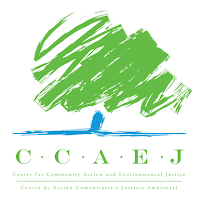 ü Omnitrans – We’ve won Removal of tanks containing more than 60,000 gallons of potentially explosive natural gas at Omnitrans facility in San Bernardino!  For more than a decade residents have complained about odors, release of natural gas and concerns about explosions from having this huge amount of natural gas next to their homes and schools.  Omnitrans has agreed to remove the tanks and will have it completed by June of 2016.  We won!

ü  Ag Park –  We’ve won Testing at the former industrial sewer plant/military base now called Ag Park in Riverside!  Finally after eight months of arm twisting, the state is coming in to test the soil where more than 43,000 gallons of industrial sewage waste  contaminated by PCBs and other chemicals.  Before homes are built on the site we want verification that the site is actually cleaned up.  We won!

ü  EJ Element – We won the adoption of the Environmental Justice Element in the General Plan in the City of Jurupa Valley (only the second one in the state!).  The EJ Element outlines those neighborhoods with heavy pollution and high levels of poverty, maps them out and develops a plan to address the issue.  It outlines ways to more effectively involve and engage those communities in the decision making process.  We won!
These are just a few of the major differences your support allows us to accomplish.  Please join us in being a part of making change in the Inland Valleys of Riverside and San Bernardino.
In addition to the most recent victories we also won some other fights:

ü  Reduced Diesel Pollution – Established a restricted truck route in Mira Loma Village to take 800 trucks an hour away from homes; and installed high performance air filters on all the homes to give children, like Liliana, healthy air to breathe.

All because of you cared and  supported our work!  Make no mistake without you these victories could not have happened!

You can help CCAEJ continue its critical work!
But make no mistake – stepping out in front and challenging those in power makes CCAEJ a target and many are out to stop us.  The World Logistics Center is one.  Because we dare to challenge the great Iddo Benzeevi, we’ve rattled some cages.  But we’re not backing down and are proceeding with our lawsuit and anything else we can do to stop this horrible project.
In stepping up to stand with the residents living near the Ag Park (once Camp Anza and the dumping ground for Rohr/Goodrich), there are those wanting to stop us.  We’ve been pointing out how all the agencies – from DTSC, EPA, AQMD and the Regional Water Board have failed this community.  In reviewing the history of this site, everyone has let this community down! We are committed to seeing this through to a real clean-up of the site and its surrounding area, including getting help for local residents with health problems.
For the Good Fight,