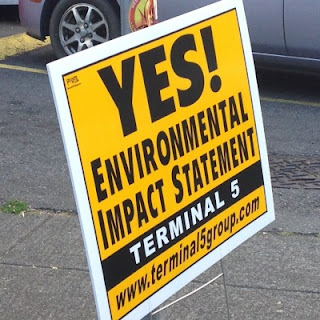 Congratulations to the Terminal 5 Group for successfully insisting on an Environmental Impact Statement for an estimated $250 million expansion of Terminal 5 at the Port of Seattle.

Concerns were raised about traffic, noise and other impacts at meetings held by the West Seattle Transportation Coalition (WSTC).

You may remember the Port of Seattle Terminal 5 from another controversy – it was to be the port for Royal Dutch Shell’s Arctic drilling rigs, plans presumably made moot by Shell’s recent decision to stop Arctic oil exploration.

This is a very interesting story – the Port of Seattle wants to spend a quarter of a billion dollars to expand Terminal 5 so it can accommodate ships that carry three times the number of ocean containers (over 18,000) as is currently possible, but insists it would not cause an increase in cargo volume.

The Terminal 5 Group doesn’t believe that, and pointed out that the terminal is in an earthquake liquefaction zone – so could turn to liquid in an earthquake, and cause natural gas, gasoline, or propane to explode.

The Terminal 5 Group conducted a campaign and petition drive to force a state environmental review, and on Friday, the port agreed to do it.  A public scoping meeting will be held on November 12.

Since the port has not identified a tenant for Terminal 5, we expect the Terminal 5 Group and Seattle’s other powerful environmental groups have learned from the Port of Oakland debacle  (The proposed Oakland coal export terminal – an environmental justice battleground heats up!), and will find a way to keep environmentally irresponsible operations out of the port.

To learn more about this EJ controversy, here are a few resources:

Terminal 5: Port of Seattle will do an Environmental Impact Statement for modernization project, after all, West Seattle Blog, October 21


Opinions expressed in this blog are those of the author, and do not necessarily represent the positions of the Moving Forward Network or its members. All errors are the responsibility of the author.