Community Environmental Justice (EJ) organizations, using citizen science techniques and collaborating with academic organizations, private funders, and governmental agencies, have helped make communities across the country healthier places to work and live.
This model has been successfully applied twice in Oakland, California to reduce the exposure of residents of overburdened neighborhoods to diesel exhaust pollution.

This was first done by the ground-breaking West Oakland Environmental Indicators Project (WOEIP), a member of the Moving Forward Network, Their citizen science and advocacy,which began in 2003, resulted in the truck routes shown here.

Similar work was begun in 2007 by Communities for a Better Environment (CBE) of East Oakland, and is the subject of today’s report.

CBE’s work resulted in a big success for the community in July of this year – new truck routes that reduce diesel exhaust air pollution in overburdened communities.

Here’s are highlights of the work CBE did over 8 years, and the outcome.

Step One was a community-based mapping study of cumulative impacts of pollution in East Oakland. 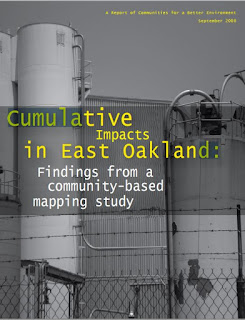 The study, carried out in partnership the California Air Resources Board and academics at the University of Southern California’s Program for Environmental and Regional Equity, Occidental College Environmental Science concentration, and Brown University Center for Environmental Health and Technology.
In their study report, Cumulative Impacts in East Oakland – Findings from a Community Based Mapping Study, CBE found that diesel trucks were a major contributor to air pollution in the community, identified several locations where illegal truck idling took place, and identified many more nearby sensitive receptors such as day care centers than the State was aware of.
The study prompted several newspaper reports (see link above), and a lot of public attention to the problem.
Step Two was a detailed truck survey, begun in 2010. 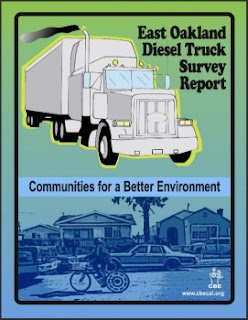 This work was documented in the East Oakland Diesel Truck Survey Report, which includes truck counts and directions at over a dozen locations, and the age of the diesel trucks.
The group made several recommendations, including Examine and Revise Truck Routes and Zoning to Protect Community Health, and Post “No Idling” Signs and Educate Truckers.

Step Three was a city-financed effort, inspired by the WOEIP and CBE work.  The team for this project was quite large, with a technical advisory group that included CBE, transportation specialists, the health department, Port of Oakland, community groups, and others. 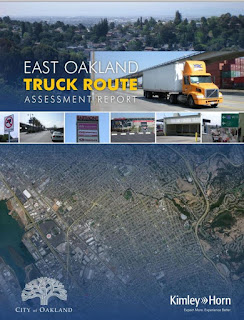 Victory was achieved on July 21 of this year, when the City of Oakland approved an ordinance for the new truck routes.

What do you think?  Can you add to the list above?