OMAHA, Neb. (AP) — A railroad union has rejected a deal with BNSF that would have allowed one-person crews on as much as 60 percent of its tracks. 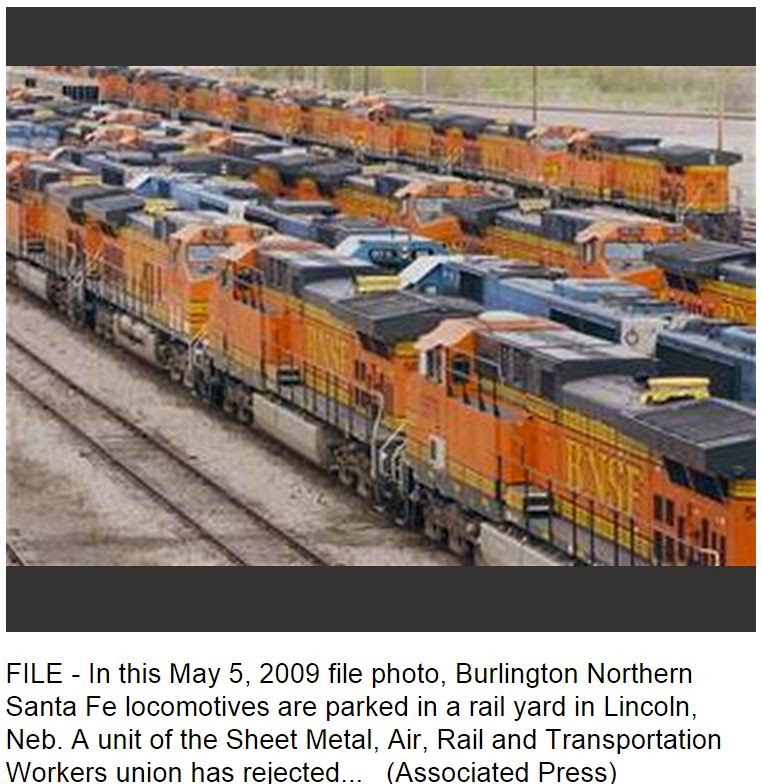 The Sheet Metal, Air, Rail and Transportation Workers union voted against the contract this week, according to a notice sent to members late Wednesday.
The deal would have allowed BNSF to use one-person crews on tracks where a system capable of stopping the train remotely had been installed. But trains that carry hazardous materials, such as crude oil and chemicals, would have continued to have two-person crews.
BNSF operates tracks in 28 states in the western U.S. and two Canadian provinces. The railroad, based in Fort Worth, Texas, said it has Positive Train Control systems installed on about 60 percent of its 32,500 miles of track.
Major U.S. railroads have been steadily reducing the size of train crews for decades to reduce costs and take advantage of technological advances that reduce the need for crew members. Agreements requiring two-person crews have been in place for nearly 30 years.
BNSF and supporters of its proposal had argued that the implementation of Positive Train Control makes it unnecessary to have a second person in the cab of every locomotive. BNSF Vice President of Labor Relations John Fleps said the railroad will honor the union’s wishes.
“They have decided not to move forward at this time, and we respect the process,” Fleps said.
Several different labor unions represent groups of railroad workers. The SMART group involved in these negotiations represents conductors and ground crew workers.
An advocacy group for all rail workers, Railroad Workers United, praised the vote because it has been campaigning against the idea of one-person crews for years because of concerns about safety risks.
But it’s clear that the issue of railroad crew size is far from settled.
Regulators at the Federal Railroad Administration have said they are studying whether to require two-person crews on the major freight railroads for safety.
And labor groups have been working to persuade Congress to pass legislation requiring freight railroads to use two-person crews.
But railroads will continue installing Positive Train Control systems, and other carriers may try to negotiate something similar to what BNSF proposed.
Congress ordered railroads to install the safety system by the end of 2015, but railroads have been seeking to delay that mandate to at least 2020 because of logistical and technical problems they’ve encountered.
The safety system is designed to address human error, which is responsible for about 40 percent of train accidents. It uses GPS, wireless radio and computers to monitor train position and speed, and stop them from colliding, derailing because of excessive speed, entering track where maintenance is being done, or going the wrong way because of a switching mistake.
BNSF railroad is owned by Warren Buffett’s Berkshire Hathaway Inc
Opinions expressed in this blog are those of the author, and do not necessarily represent the positions of the Moving Forward Network or its members. All errors are the responsibility of the author.