“It’s very clear to us that the plan by Global is to turn the Hudson (Valley) into a national crude oil hub,”

Facing a State moratorium on the expansion of crude oil processing at the Port of Albany, pending a health study, Global Companies LLC plans to heat and transfer Bakken oil from trains to barges and ships upriver from Albany at the Hudson River town of New Windsor.
This news article, published Saturday in the Times-Herald Record, provides more information on the plan and its opponents.
For more background, check out Hudson Valley’s crude pipeline.
———————————————————
By James Walsh
Times Herald-Record
Published: 11:15 PM – 03/15/14
NEW WINDSOR — One of the largest distributors of petroleum products in the Northeast plans to unload volatile crude oil from trains for transport by barge or ship from this Hudson River town.
The project would let at least some oil trains supplying Global Companies LLC bypass the busy Port of Albany, while accomplishing the same tasks now under scrutiny by government officials and environmentalists. 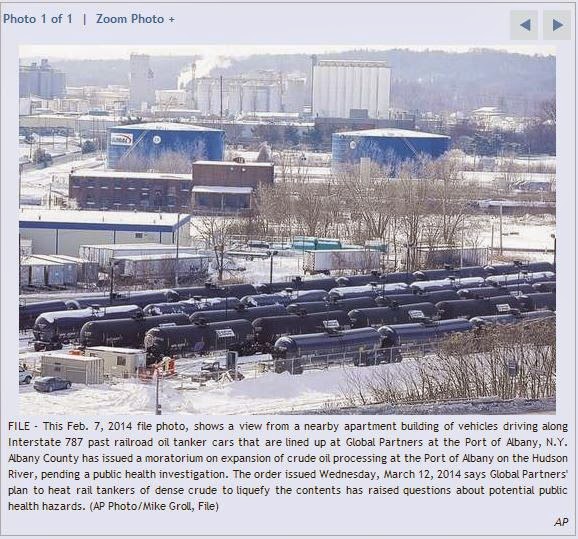 Global applied last year to the state Department of Environmental Conservation to modify the company’s air-quality permit to reflect the planned changes at the site.

Global Companies’ proposal for New Windsor:
• Construct an intermodal rail yard for transloading petroleum liquids and volatile organic liquids.
• Add marine loading of petroleum liquids and volatile organic liquids, including ethanol, crude (oil), heated products and gasoline at existing marine docks at Newburgh and North terminals.
• Convert tanks from storing distillates to storing volatile petroleum products.
• Install boilers to heat products contained in rail cars and storage tanks.
Source: State Department
of Environmental Conservation
permit application
It intends to build a rail transloading yard at 1220 River Road, property that Global plans to buy from Eastern Harbour Associates, an affiliate of Steelways Inc. The site is near Global’s north and south terminals.
Piping would connect those terminals and Global’s Newburgh terminal. Petroleum products would be unloaded from train cars to storage tanks, then put on ships or barges at the Newburgh and north terminals, Nicole Brower of Envirospec Engineering stated in the DEC application.
Two storage tanks capable of holding millions of gallons would be converted to hold volatile petroleum products instead of distillates.

DEC officials are reviewing Global’s application amid a climate that’s increasingly hostile toward oil trains.
Albany County enacted a moratorium Wednesday to prevent Global from heating crude oil at the company’s Port of Albany Terminal, where Global also seeks to modify its air-quality permit. The moratorium stands until the county Health Department determines that residents are safe.
In January, Gov. Andrew Cuomo ordered state agencies to do a 90-day review of oil trains and preparedness for disaster. The trains sometimes pass within feet of the Hudson River and under structures, including the Mid-Hudson Bridge and the Walkway Over the Hudson.
Global completed work at its Albany terminal in 2012 that boosted its capacity to receive and distribute petroleum products, including crude oil, to 160,000 barrels daily from 55,000 barrels.
It can unload two, 120-car trains in 24 hours, according to a company filing with the Securities and Exchange Commission. Each tank car can carry about 3,000 gallons of oil.
Both Global, of Waltham, Mass., and Buckeye Partners of Houston were authorized by the state in 2011 to bring a total of nearly 3 billion gallons of petroleum products per year into Albany, said Chris Amato, attorney for Earthjustice, an environmental protection organization.
“It’s very clear to us that the plan by Global is to turn the Hudson (Valley) into a national crude oil hub,” Amato said.
Sen. Chuck Schumer, D-N.Y., also sounded the alarm. He’s called for lower train speeds in populated areas — oil trains travel through Kingston and Newburgh — as well as to replace tank cars that even the rail industry views as unsafe.
“This is threatening river communities in a very significant way,” said Kate Hudson, watershed program director for Riverkeeper. “It’s one of the biggest threats that New York state and the Hudson River ever faced. One spill could roll the clock back decades.”
An oil-spill drill held in November on tracks adjacent to Global’s terminals drew responders from Global, the Coast Guard, and hazardous-materials teams from Orange and Dutchess counties.
Global Companies did not return a reporter’s emails and telephone call seeking information about the New Windsor project.

The damage from disastrous spills has already been felt in North Dakota and Canada. Forty-seven people died in July when a train hauling volatile Bakken crude derailed and exploded in Quebec. Residents of Casselton, N.D., were evacuated in December after a fiery collision involving an oil train. Then, another train loaded with crude oil derailed — without spillage — in January on a Philadelphia bridge.
The potential for catastrophe has since been felt closer to home. The engine of an empty northbound oil train derailed Feb. 25 in the Town of Ulster.
A few days later, 13 highly flammable oil tank cars derailed, but didn’t topple, in CSX’s Selkirk yard near Albany. No oil spilled either time, but CSX was fined $10,000 because it didn’t notify the state Department of Transportation within an hour.
Simon Gruber of Cornwall-on-Hudson lives about 1,500 feet from tracks carrying oil trains. He’s an environmental planning consultant and president of the Hudson River Watershed Alliance. The potentially dangerous presence of the trains, which noisily pass a municipal riverside park near his home, surprised Gruber.
“It’s all sprung up very quickly,” he said. “I never thought about it before, and here it is.”
He wonders if the trains, mostly controlled by the Federal Railroad Administration, are more dangerous than the controversial Keystone Pipeline.
“Not building that pipeline,” he said, “will not stop Canada from producing that oil.”
jwalsh@th-record.com
Opinions expressed in this blog are those of the author, and do not necessarily represent the positions of the Moving Forward Network or its members. All errors are the responsibility of the author.