By Bob Gottlieb
How do Tyson Foods, chicken paws, the Port of Savannah and the school lunch menu at the Los Angeles Unified School District (LAUSD) all intersect? 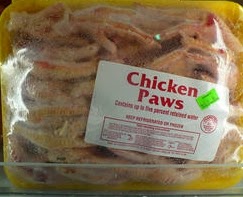 Start with Tyson Foods and chicken paws. A little more than ten years ago, Tyson, and some other poultry producers, discovered the bottom line value of chicken paws, the part of the chicken below the ankle. Long seen as a waste product not available for its U.S. customer base, the chicken producers discovered the China and Hong Kong market opportunity since its residents considered chicken paws to be a delicacy and flavor enhancer in certain prepared foods such as soups. With this recognition, chicken paw exports to China and Hong Kong by Tyson and the other poultry producers exploded, and chicken exports to China, led by paws, became a major profit center for Tyson.
By 2010, this huge jump in chicken paw exports had also become a major boost for the Port of Savannah and a factor in the port’s own expansion. Prior to the development of the chicken paw trade, the ships coming in from China with imported goods for retailers like Walmart would charge more when their ships returned empty-handed back to China. With hundreds of chicken paw containers significantly boosting exports, the shippers now charged less, which also reduced the costs for the low-cost big box stores and other retailers who depended on the goods from China.
Then where does the Los Angeles school lunch menu come in? In the fall of 2011, after more than a decade of organizing, food justice activists had helped bring about a major change in how LAUSD would source its food and the menu items it would provide for school lunch. This was a big deal. LAUSD is the second largest school district in the country, with more than 650,000 students, most of them low income and highly diverse, and a $100 million food purchasing budget. A successful shift towards healthier food would have a major impact.
Enter Tyson, its primary poultry supplier, selected in a contentious 4-3 school board vote in 2010, along with other major corporate food meat suppliers, Jennie O and Don Lee. Tyson especially has long had a negative reputation among food, environmental, labor, animal welfare, and social justice activists. But Tyson is the largest poultry supplier among school districts nationwide with its various chicken nugget-like products and it could easily impact school lunch operations. Which it did!
In 2010, China imposed high tariff restrictions on its chicken imports due to a global trade dispute with the U.S. and, as a result, Tyson’s imports fell. But the next year, in 2011, they rose again and it caused a major supply chain disruption given the renewed expansion of its chicken exports. Similar supply chain problems were also happening with the two other big meat providers. The result: no chicken or meat products became available for six weeks, just as the new LAUSD menu was being rolled out. While the vegetarian meals were healthy, diverse, and tasty for some, they were still an abrupt shock to many other students, especially without any chicken or meat. As a result, the new menu became controversial, with some parents and principals pushing back, causing at least a partial retreat by the LAUSD food service operation. Fox commentators like Bill O’Reilly had a field day, jumping all over the change and linking it to Michelle Obama and foodie culture.
The future? Tyson’s contract will need to be renewed in 2015. Expect another royal battle. And as for Tyson in China: could those chicken nuggets also be coming from China? Stay tuned for another post.
Opinions expressed in this blog are those of the author, and do not necessarily represent the positions of the Moving Forward Network or its members. All errors are the responsibility of the author.