Released yesterday, a news article and excellent blog post on protests concerning oil trains in the Philadelphia area, plus news on the State of Delaware refusal to release oil train information. 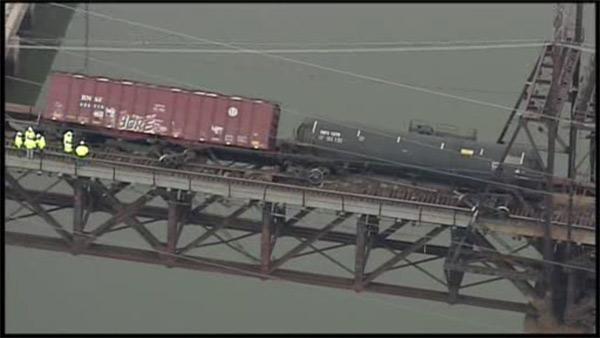 For more information on this subject, please visit the Moving Forward Network Oil by Rail Collection

Delaware Riverkeeper Network is a nonprofit advocacy organization with 15,000 members throughout the watershed states working to defend the entire 13,539 square mile Delaware River Watershed. www.delawareriverkeeper.org
Northeast Grays Ferry Residents Association, Inc. is a registered 501 c3 nonprofit organization that believes in equal opportunity, public health and safety, economic development and fights poverty to enhance the quality of life for the people of Northeast Grays Ferry.
Philadelphia Interfaith Power and Light (Phila IPL) is a Chapter of Pennsylvania Interfaith Power and Light (PA/IPL), communities of faith responding to climate change as a moral issue.
Rising Tide is a grassroots network of unpaid activists focused on direct action targeting the funders and profiteers of dirty energy projects.https://www.facebook.com/PhillyRisingTide
South Philadelphia Rainbow Committee is a grassroots community group in Southwest Philadelphia, concerned with bringing an overall sense of security and self-awareness to the City of Philadelphia.
West Passyunk Neighbors Association is working to strengthen our community and improve our neighborhood’s way of life, 18th to 25th, Passyunk to Mifflinhttps://www.facebook.com/wpnaphilly

(Photo: GARY EMEIGH/THE NEWS JOURNAL)
41CONNECTTWEETLINKEDIN 11COMMENTEMAILMORE
WASHINGTON – Despite a series of explosive train crashes, Delaware will not publicly disclose when and where trains carry crude oil across the state.
The state’s department of safety and homeland security confirmed that CSX Corp. and Norfolk Southern Corp. report oil train shipments in compliance with the Department of Transportation’s May emergency order requiring rail companies to notify state officials when they ship more than 1 million gallons of the highly flammable Bakken crude.
But Lewis Schiliro, the state’s secretary of safety and homeland security, signed confidentiality agreements with both rail companies, agreeing to share the shipment information only with state and local emergency management agencies.
“The disclosure of this sensitive information to the general public could impact transportation security and public safety,” department spokeswoman Kimberly Chandler said.
STORY: Delaware officials hear oil train safety concerns
STORY: Feds: Industry hampering oil train safety
PBF Energy‘s Delaware City Refinery received an average 102,400 barrels of Midwestern and Canadian crude oil daily during the first quarter of the year. Company officials have said that number could grow to 210,000 barrels daily, the equivalent of three to four trainloads each day.
CSX has said little about its crude-by-rail plans in Delaware, although company tank cars are a regular sight along its tracks in northern New Castle County, and the railroad has ties to an emerging crude by rail operation in nearby Chester County, Pennsylvania.
Pennsylvania, Oklahoma and other states also have declined to share details on crude oil trains with the public in recent months, as railroads impose confidentiality requirements on emergency agencies as they comply with a federal requirement to notify emergency services about shipments.
Since 2006 there have been 16 significant freight rail accidents in the U.S. and Canada, including one last July that killed 47 people and destroyed much of a small town in Quebec.
Oil from the Bakken formation in North Dakota and Montana is more flammable and volatile than other crude oils. Since November, train derailments and resulting spills in Alabama, North Dakota and Virginia have all caused fires and millions of dollars in environmental damage.
In recent weeks, states have come under pressure from residents and environmental organizations to disclose the routes, frequency and volume of trains carrying oil. Some, including California, Montana, North Dakota and Virginia, released statistics.
Amy Roe, who works for the Sierra Club of Delaware, compiled a map of where Norfolk Southern trains ship oil based on eyewitness accounts.
The trains cross from Pennsylvania into Delaware through the Susquehanna River and head toward Newark. From there, the trains take three routes to the Delaware City refinery. One route passes through Newark and east along Del. 72 to the refinery. Another travels north from Newark to Wilmington, then follows the Delaware River south. Another route goes southeast from Newark to New Castle before heading south to Delaware City.
Roe said Norfolk Southern keeps trains, many with tankers full of oil, in a storage facility near her home in Newark. Accidents near the facility or crashes involving nearby Amtrak trains could cause explosions, she said.
“There’s all kinds of terrible scenarios about horrible things that can happen,” she said, adding that Newark has “no appropriate facility to fight that kind of fire.”
Rail companies balked at states disclosing too much information, citing security concerns and commercial confidentiality for their clients.
CSX and Norfolk Southern officials said they sent all relevant information to Delaware per the Department of Transportation’s order, but both asked state officials not to disclose any details on crude oil shipments.
“We feel that the disclosure of specific routes, specific amounts, timetables, schedules undermines our competitiveness in this environment,” Norfolk Southern spokesman Dave Pidgeon said.
PBF Energy Inc. told investors in April its Delaware City refinery takes in an average 102,400 barrels a day of rail-shipped crude oil. The plant has the capacity to process 191,000 barrels of crude oil daily.
In Delaware, CSX only operates in northern New Castle County, with trains passing through Newark and Wilmington. No CSX trains visit the Delaware City refinery.
Spokesman for Delaware Democratic Sens. Chris Coons and Tom Carper said the senators were aware the state decided not to disclose details of the oil shipments, but they had not yet taken a position on the issue.
Coons was one of 16 senators who sent a letter to the Senate transportation committee calling for a $40 million fund over two years to increase inspections and research on how to safely transport crude oil.
In March, state legislators held a community meeting in Delaware City on the safety of crude oil transport. Many expressed concerns about the preparedness of local and county officials to deal with an accident and resulting spill.
CSX and Norfolk Southern have increased track inspections, reduced train speed in certain areas and added a monitoring system to detect any issues along crude oil rail tracks, officials said.
Norfolk Southern offers training to emergency responders on how to handle shipments containing hazardous materials, including crude, Pidgeon said. A training took place in Newark in October and another will be held in Wilmington in August.
Contact Ally Mutnick at amutnick@gannett.com or on Twitter: @allymutnick
Opinions expressed in this blog are those of the author, and do not necessarily represent the positions of the Moving Forward Network or its members. All errors are the responsibility of the author.