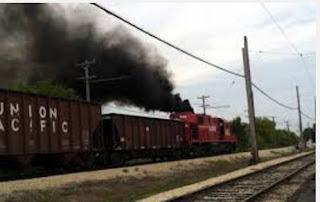 I haven’t seen survey data on the subject, but from my personal experience a surprising number of people – even well educated people – don’t understand the health risks of diesel exhaust.  One positive effect of catching Volkswagen in this massive fraud is an outpouring of news on that subject.

Please read these recent news articles, and share them on social media, via email, and by linking to them in your blog posts.

Why VW and Diesel Deserve Everything That’s Coming to Them, autoevolution
The problem with that is nobody has so far invented a way to actually make diesel engines clean. You can read that again: there is no such thing as a “clean diesel”…
The best diesel particulate filters developed until now can only stop diesel soot up to 2-3 microns in size, which is what Volkswagen tried to pass as a “clean diesel” in the US. As a reminder, it’s actually the smallest soot particles that are worse for your health, since they can go straight into the lungs and bloodstream of the inhaler.
The Shocking Truth about Diesel Emissions, Care2
…diesel emissions account for two-thirds of particulate matter in the air. Particulate from diesel contains hundreds of chemical elements, including: sulfate, ammonium, carcinogens and heavy metals like cadmium and arsenic… Everyone is susceptible to diesel soot pollution, but especially children, those with pre-existing respiratory conditions, and the elderly. It is estimated that tens of thousands of people die prematurely as a result of particulate pollution.
Humans routinely exposed to diesel exhaust have a higher risk of lung cancer. Those in the transportation industry involved with railroads or trucking have a 20 to 50 percent increased risk of lung cancer than those who are not involved in these industries.
Air pollution exposure has been linked to an increased rate of brain aging… Air pollution has also been linked to an increased rate of cognitive decline, as well as an increased incidence of heart disease, obesity, dementia and Alzheimer’s disease, and Parkinson’s disease.
According to a study in the journal Environmental Health and Technology, 2 million deaths globally could be averted simply by cleaning up the air.
Clean Diesel: Too Good To Be True?, National Public Radio
Diesels are more expensive than gasoline powered cars. But they drive better; they’ve got better torque…The downside is that they’re dirty. They spew deadly particulate matter and nitrogen oxides (NOx) that make it hard to breathe.
A lonely voice speaks out again, Sacramento Bee
Diesel engines do emit less greenhouse gases than gasoline-powered engines. But climate change is a long-term fight. The damage caused by diesel exhaust is more immediate; it can lead to chronic bronchitis, asthma and lung cancer.
NOx gases in diesel car fumes: Why are they so dangerous?, Pys.org
NOx has direct and indirect effects on human health. It can cause breathing problems, headaches, chronically reduced lung function, eye irritation, loss of appetite and corroded teeth. Indirectly, it can affect humans by damaging the ecosystems they rely on in water and on land—harming animals and plants….Also emitted in diesel fumes are solid particles which can penetrate deep into the lungs and cause cancer, chronic breathing problems and premature death in people with heart or lung disease.
Opinions expressed in this blog are those of the author, and do not necessarily represent the positions of the Moving Forward Network or its members. All errors are the responsibility of the author.