Late last year, continuing an expensive campaign to build a pro mega-warehouse political machine in the heavily polluted Inland Empire city of Moreno Valley, California, developer Iddo Benzeevi spent over $500,000 to support three candidates for the city commission.  Two of his candidates won election, one of them by seven votes.

At stake – his long-standing proposal to build the “World Logistics Center” a warehouse complex the size of 700 football fields  that would generate over 14,000 diesel truck trips and 50,000 car trips per day, and generate huge amounts of dangerous diesel exhaust air pollution.

The State of California says the legally required environmental analysis is “legally inadequate” because it does not properly address of health risks of the air pollution it would cause, or measures to reduce pollution, such as the use of Zero Emissions trucks or other technology. 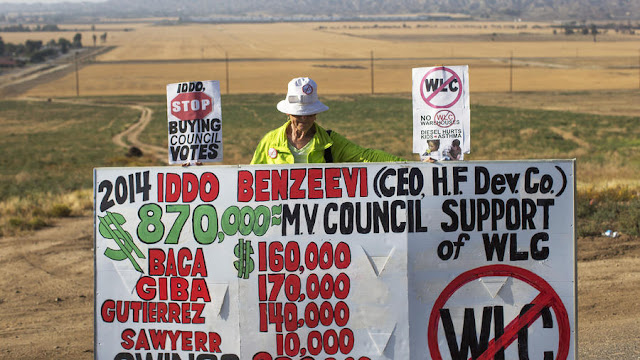 Fast forward to this week – the developer’s two favored city commission candidates and the Mayor, who he had supported in earlier elections, voted to approved the project.  The other two city commissioners voted “no”.

But  – though the the developer could influence city commission elections, he can’t buy Moving Forward Network members Earthjustice and Center for Community Action and Environmental Justice (CCAEJ), or the Sierra Club and Center for Biological Diversity.

These groups and others are working together to oppose this project, so expect to see them in court, fighting to protect the residents of Moreno Valley.  We’ll follow and share the news, so stay tuned!
______________

For background, check out: