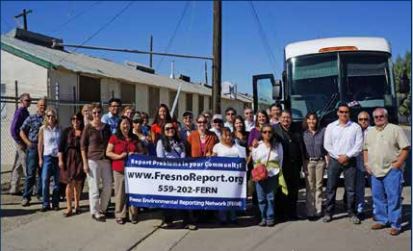 Moving Forward Network member Comite Civico Del Valle, Inc (CCV), has a very impressive on-line environmental tracking system.  Identifying Violations Affecting Neighborhoods was developed in collaboration with the University of California Davis and other community groups.  CCV sent us the following information.
Residents use video and other tech effectively to report environmental hazards
A partnership that facilitates the reporting of environmental hazards by residents of underserved communities throughout California directly to agencies that enforce the laws should be enhanced and expanded, a University of California, Davis, report says.
The report, by the UC Davis Center for Regional Change, was released this week as part of a daylong summit on the Identifying Violations Affecting Neighborhoods, or IVAN, program.  The summit was co-hosted by the California Environmental Protection Agency, and streamed by webcast.
“The program resembles an environmental version of a neighborhood watch,” said Shrayas Jatkar, a master’s degree candidate in community development who will present the report with Jonathan London, associate professor in human ecology and director of the center.
The innovative program studied by UC Davis researchers makes community members partners in identifying environmental hazards through digital technology and crowd sourcing.
The partnership among local, state and federal agencies and community groups, started in 2009, has been implemented in the Wilmington area of Los Angeles, the Imperial Valley, Coachella Valley, Kern County, Fresno County and Kings County. It will soon be expanded to Sacramento and San Francisco.
The report examined four cases in which IVAN played a significant role: a cattle feed lot polluting a water source, improper disposal of fracking fluid, a hazardous waste disposal site and a gas leak.
“The use of technology has really helped make the program effective,” Jatkar said. “In the case of the fracking fluid release, a resident was able to capture the release on video and upload it to IVAN’s reporting website. IVAN is also having an impact on a larger scale than was anticipated because when a problem is found in one place it has led to agencies to looking for similar issues in other locations.”
The report provides suggestions for improving the IVAN program including:
The program represents an innovative approach to transforming the environmental justice-related monitoring  and enforcement process in California from one based on one-way and often opaque flows of communication to a more collaborative partnership among public agencies, environmental justice organizations and community members, the report said.
“The UC Davis report is based on active partnerships between the university and community partners to solve pressing social and environmental problems,” London said. “It takes a very solutions-oriented approach.”
The summit included panel discussions with representatives from environmental agencies and focus area organizations including Jared Blumenfeld, the U.S. EPA regional administrator; California Assembly member Eduardo Garcia (D-Coachella); and Luis Olmedo, IVAN founder and administrator and executive director of Comite Civico Del Valle Inc., a nonprofit community education and advocacy group in the Imperial Valley.
This report was funded by the California Wellness Foundation and The California Endowment. The summit was organized by Comité Cîvico Del Valle, Central California Environmental Justice Network, San Joaquin Valley Latino Environmental Advancement Project, CalEPA, and CRC.
Additional information:
Opinions expressed in this blog are those of the author, and do not necessarily represent the positions of the Moving Forward Network or its members. All errors are the responsibility of the author.