Ports that want to protect their neighbors use shore power 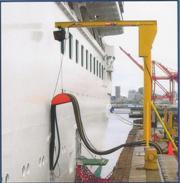 In recent months, there has been a argument from some corners indicating that Shore Power (aka Cold Ironing) is old fashioned and unnecessary, and can be avoided by installing scrubbers on ships.

Not only does Shore Power protect the community from Diesel Exhaust pollution, in most cases it reduces greenhouse gases.

Port of Seattle  – “Nothing compares to the benefits of zero emissions by connecting the vessel to shore power and shutting down the vessel’s engines while the ship is at the dock,”

Port of Los Angeles –  “Even with low sulfur fuel, ships remain one of the largest sources of pollution in our area, and low sulfur fuel for ships still contains 1,000 ppm sulfur, compared to an average 30 ppm sulfur required for automobile fuel.”

Port of Oakland –  “It’s critical that we reduce (ship) emissions as much as possible, particularly while at berth. This is important to the port, its neighboring communities and the region.”

To learn how this was done four years ago in San Diego for $7.1 million, review the video below.