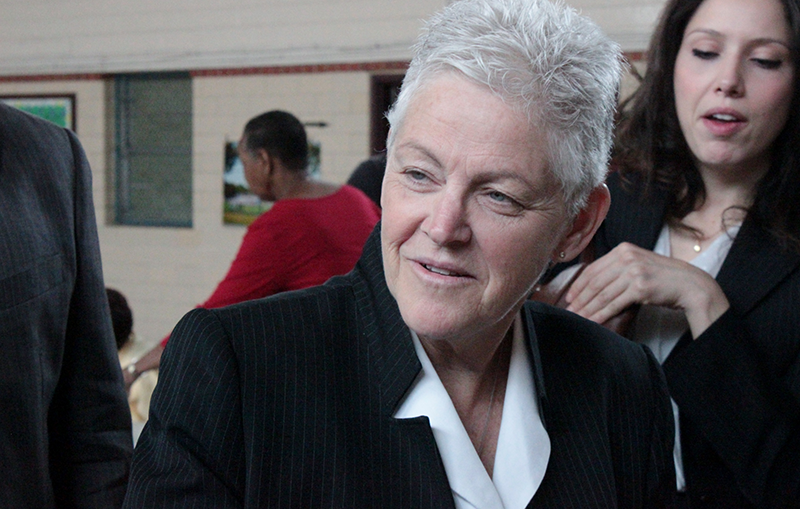 The highlight of Administrator McCarthy’s visit was her promise that the EPA will do more to reduce pollution in Houston neighborhoods near chemical plans and refineries.

The event was attended by members of 15-20 organizations, including Moving Forward Network participants t.e.j.a.s, Air Alliance Houston, and National Resources Defense Council, and representatives of environmental and community groups in several Gulf Coast states.  During the event, t.e.j.a.s youth showed two videos, and Gina McCarthy spoke and answered questions from the audience.

The back story – Last year, Juan Parras of t.e.ja.s, and other members of the Environmental Justice Health Alliance met with Administrator McCarthy, presented her with a copy of their report Who’s in Danger, walked her through the recommendations (page 43), and asked her to visit the six communities highlighted in the report.  She said she would, and followed through with her first visit yesterday.

The morale of the story – Citizens working together and engaging with government can make a difference!

During her visit to Houston, Administrator McCarthy also spoke at a conference on energy and the environment, and announced the award of $900,000 to the Port of Houston to replace old drayage trucks with cleaner 2015 models.

For more recent news about Gina McCarthy, check out:

Environment ‘Has Never Been A Partisan Issue’ For EPA’s Gina McCarthy, Huffington Post

Opinions expressed in this blog are those of the author, and do not necessarily represent positions of the Moving Forward Network or its members. Errors are the responsibility of the author.