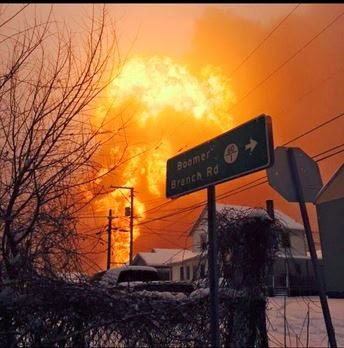 In the second major oil train disaster over the holiday weekend, on Monday afternoon  a CSX training carrying over 100 tank cars carrying Bakken crude oil and perhaps other toxins derailed southeast of Charleston, West Virginia, destroying a house, thrusting an oil tanker car into the river, exploding, sending a fireball 300 feet into the sky, and burning for over nine hours.

Burning oil poured into the river, forcing the shutdown of at least two downstream water treatment plants. Two towns were evacuated, and the governor declared a state of emergency and sent National Guard troops to help battle the blaze. Just one injury has been reported.
Last year an oil train on the same line derailed and exploded near Lynchburg, Virginia.

In the first oil train derailment of the weekend in northern Ontario, Canada, on Saturday, a CN train hauling oil derailed and burned until at least Sunday afternoon.  Fortunately, this derailment was in an isolated area.

Ontario
Opinions expressed in this blog are those of the author, and do not necessarily represent the positions of the Moving Forward Network or its members. All errors are the responsibility of the author.