Shipping emissions in ports to quadruple by 2050

Source: Air Quality News
Think tank report says “strong policy responses will be needed” to reduce projected increase in air pollution emissions from shipping
Global air pollution emissions from shipping in ports are expected to quadruple by 2050 from current levels, requiring “strong policy responses” from governments and regulators to combat this increase, according to a global think tank report.
A December 2014 discussion paper by the International Transport Forum (ITF) – part of global think tank the Organisation for Economic Co-operation & Development (OECD) – projects that “most” emissions from shipping in ports – methane, carbon monoxide, carbon dioxide and nitrogen oxides – will grow fourfold up to 2050. 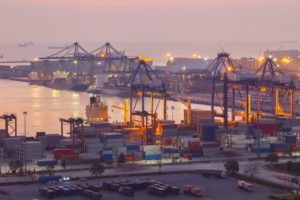 Emissions from shipping in ports is expected to quadruple by 2050
This will bring global nitrogen oxide emissions up to 1.3 million tonnes, with the sharpest increases likely in Asia and Africa due to “strong port traffic growth and limited mitigation measures”.
The ITF conducts research addressing all modes of transport with the aim of helping to shape the global transport policy agenda. Its 54 members include the USA, Australia and China as well as the UK, Ireland and a number of other European countries.
Research in the report shows that while NOx and particulate matter emissions are at similar levels for both road and shipping transport, sulphur dioxide emissions from shipping are “substantially higher” than those of road transport .
Evidence suggests that levels of the four main pollutants from shipping – carbon dioxide, nitrogen oxides, sulphur dioxide and particulate matter – increased fourfold over the period 1950-2001. This is faster than the increase of ships over that period, which tripled.
The report states: “These emissions have increased at a large pace over the last decades and are expected to increase in the future.”
According to the paper, air emissions from ships are “considerable” and around 85% of emissions come from containerships and tankers, which have short stays in ports, but high emissions during these stays.
However, European ports have much lower levels of sulphur dioxide and particulate matter emissions than their share of worldwide port calls would suggest, which the report says is partly due to EU regulations requiring low sulphur fuels at berth.
The report states: “Although most of these emissions take place at sea, the most directly noticeable part of shipping emissions takes place in port areas and port-cities. It is here that shipping emissions have the most direct health impacts.”
ITF cites evidence from the Los Angeles Health Survey that Long Beach communities in close proximity to the Port of LA experience higher rates of asthma, coronary heart disease and depression compared to other communities in LA.

The costs associated with the impacts of shipping emissions such as NOx, Sulphur dioxide and particulate matter – in ports is estimated at around 12 billion euros (£9.5 billion) per year in the 50 largest ports in OECD countries.
Furthermore, the report states that around 230 million people are directly exposed to air pollution in the top 100 world ports in terms of shipping emissions.
In order to reduce these projected emissions, the report states “strong policy responses will be needed”, such as more stringent rules on sulphur content in ship fuels and more global emission control areas than the four which are currently in place.
It also recommends including shipping in global emissions trading schemes and climate inance schemes.
In addition, the report suggests that “a lot could be gained by policy initiatives of ports themselves”, but that existing instruments to mitigate emissions at some ports, such as infrastructure, regulation and incentives, would “need wider application in order for ship emissions in ports to be significantly reduced”.
Opinions expressed in this blog are those of the author, and do not necessarily represent the positions of the Moving Forward Network or its members. All errors are the responsibility of the author.