Last week, we covered the development of a personal air pollution monitor in Personal Air Quality Sensor Update – a clip on monitor for $75 or less is under development

This week, another device, the TZOA, which measures Particulate Matter and UV, has gotten a lot of press.  See the Engadget article below, or the TZOA Kickstarter site for more details.

For technical and other background on personal air monitors, check out Next Generation Air Pollution Monitors in the MFN Library. 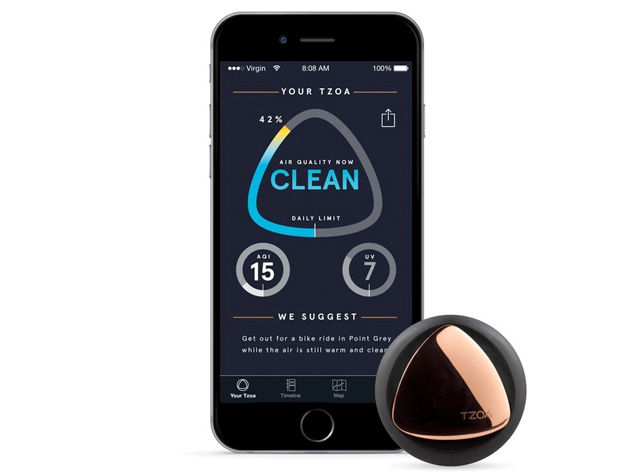 Some mornings, you wake up, walk outside and breathe in a hearty lungful of dirty,smog-heavy air. It’s almost tasteless, but it can still wreak havoc on your respiratory conditions. What if you could avoid those nasty, unseen pockets of nasty air? That’s sort of the idea behind the TZOA, a Kickstarter project that bills itself as the world’s first wearable enviro-tracker. The tiny, round tracker has sensors that keep tabs on air quality,UV light, humidity, and temperature — all of which feed data to a companion smartphone app to quantify the environment around the wearer. The user can then see get a quick look at the quality of the local air and upload the data to create a crowdsourced pollution map of their town.
Naturally, the product is still in the early stages: the team is still working with early prototypes, and is working to test those devices against high-end atmospheric sensors. If everything goes well, the TZOA will be ready to enter production for a (projected) summer 2015 launch. Want to help? Check out the Kickstarter page at the source link below — a $135 pledge nabs you a TOZA sensor from the project’s first production run.
Opinions expressed in this blog are those of the author, and do not necessarily represent the positions of the Moving Forward Network or its members. All errors are the responsibility of the author.