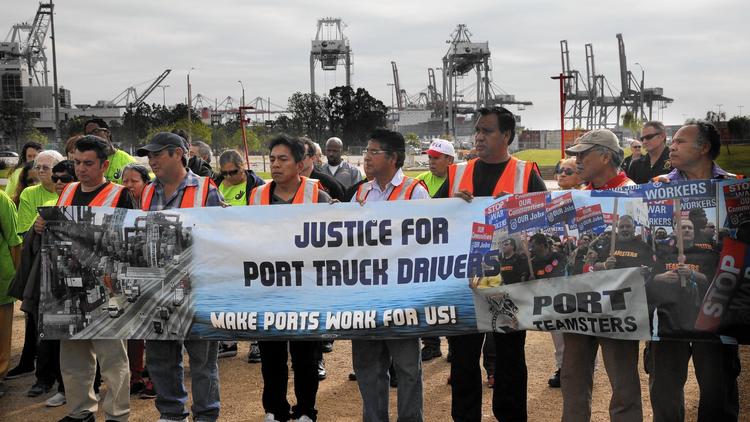 Striking truck drivers from two short-haul firms serving the ports of Long Beach and Los Angeles participate in a noontime rally at Wilmington Waterfront Park. Cargo is still moving through the ports as other unions are not joining the walkout. (Mark Boster / Los Angeles Times)
Daniel Linares, 58, hit the picket line last week at the ports.
Why?
I’m going to tell you why, because what’s happening at the Los Angeles and Long Beach ports isn’t just about economic justice in a region with staggering income inequality, but there’s a possibility it could put a damper on your holiday season.
In the worst-case scenario, port truck drivers will continue to strike, longshoremen will stop unloading cargo, more and more ships will clog the harbor, and the pickings will be slim at your favorite retailer. About 40% of the goods shipped to the U.S. from overseas flow through those ports. So you might have trouble finding the television, computer, bicycle or fall wardrobe on your shopping list, or you might pay more because it was shipped here by air.
“I think there’s already been an impact,” said L.A. port director Gene Seroka, who along with L.A. Mayor Eric Garcetti’s office brokered a deal Friday to get drivers, Teamster organizers and trucking companies into a room together to talk things out and keep goods flowing. 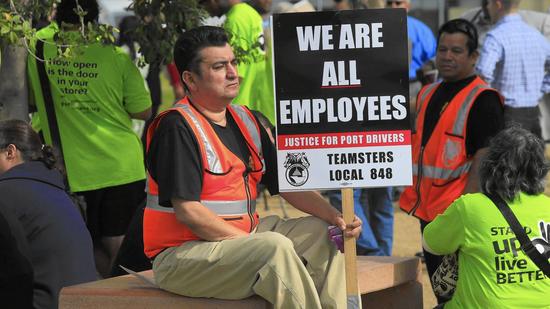 Striking truck driver Julio Cervantes holds a sign during a rally and news conference at Wilmington Waterfront Park. (Mark Boster / Los Angeles Times)
But let’s get back to Linares, the Lynwood truck driver who has reported for duty every morning at 6 a.m. not knowing whether he’d get an assignment. He has no vacation time, no healthcare or other benefits and no guarantees of work. And yet he’s under contract to one company — Pac 9 — and can’t take the truck he’s been leasing there and work for anyone else.
“I can stay at the ports for four hours, five, six, and maybe be there all day for one load, and then get just $50,” said Linares. Sometimes it’s much better than that, but he routinely puts in countless hours for which he’s not compensated.
In other words, little has changed for Linares and hundreds of other drivers since I visited the ports in May.
Decades ago, such drivers were full-time employees, but many companies began treating them as independent contractors to bump profits and cut labor costs. And when environmental safeguards made expensive clean-energy trucks mandatory, drivers essentially became indentured servants, with truck leasing costs, insurance and other expenses deducted from their paychecks, often knocking them below minimum wage but still requiring them to pay for gas and repairs.
When I wrote that column last spring, I heard from a truck company owner named Martin Davis, who told me he handles his drivers a little differently, and he’d be happy to share his perspective on what’s happening at the port. So last week I drove to Hawthorne for a visit with the founder of Pace Freight Systems.
I can stay at the ports for four hours, five, six, and maybe be there all day for one load, and then get just $50.– Daniel Linares, 58, a Lynwood truck driver
Davis has a photo of his father on the wall, standing in front of the first truck he bought in the 1940s, when he had his own company. Davis himself got into the business in 1977 in Los Angeles, after working in air cargo for a couple years. He started with one truck and one employee: himself.
“I put on a suit and I went out and hustled business,” he said. “I’d say, ‘Do you need something moved?’ They’d say, ‘How many trucks do you have?’ I’d say, ‘How many trucks do you need?'”
He just hoped the answer was “only one.” But he and a partner began to grow the business into a thriving operation, opening a branch in San Diego and employing 90 people at one time before deciding to scale back to the current 42.
But from the beginning, Davis wanted reliable, loyal, healthy and reasonably happy employees, because that’s just good for business all around, so he’s always paid a decent wage and health insurance. He offered a 401(k) plan at one point, too, but there weren’t enough takers.
“I’m not paying the highest wage out there, but there’s pretty much all the overtime they want,” said Davis.
After eight hours at $16 per, his drivers jump to $24, and they make $32 an hour after that. He said he’s had employees stick with him for decades, with a few dating back to the beginning of the company.
“I guess I could’ve made a lot more money,” Davis said, if he’d used independent drivers at lower rates and no benefits. “But my wife and I have led a pretty good life. We’re not wanting for anything. We’re not living in Bel-Air, but our life is good.”
Davis said about 30% of his business is the kind of work done by striking drivers at the port, but that’s bumping up now because of the labor issues. As he sees it, some independent drivers helped create the current mess by working for practically nothing, sometimes in unsafe trucks, driving down hauling fees in a race to the bottom.
The big-box discount retailers definitely demand the lowest possible prices for shipping, said Davis, and everyone on the supply chain can get squeezed to meet consumer demands for rock-bottom prices. But as he sees it, some trucking companies have played that game too, undercutting competition and making living wages for drivers harder to come by.
“I have to go in to a client and say I charge $400 to pull a container. I have to charge that in order to pay a living wage to my employees,” he said. “But some of these companies will go in and say they’re willing to haul it for $275, and that’s not a living-wage price.”
Still, his loyal customers stick with him because of his firm’s reliability, and in fact he’s looking to add two drivers. But the striking port drivers are reluctant to walk away from their unsatisfactory jobs because they’d be walking away from their investment in the trucks they were leased. As Daniel Linares put it for me, he wants what he’s owed from his current company, and he’s sticking around to fight for it.
Linares and other drivers have filed dozens of wage-theft complaints against their companies with the state labor board, and they’re running the table, with one victory after another.
At some point, Martin Davis thinks, trucking companies will have to agree that those drivers are employees rather than independent contractors and pay them accordingly.
Those companies, by the way — including Pac-9 and TTSI — had no comment when I asked for interviews.
“They need to pay a living wage to these guys,” Davis said. Yes, it may be a very competitive industry, but “the problem is not the peasants, it’s the king.”
steve.lopez@latimes.com
Opinions expressed in this blog are those of the author, and do not necessarily represent the positions of the Moving Forward Network or its members. All errors are the responsibility of the author.