The U.S. Department of Transportation and the Port Authority of New York and New Jersey have released a draft Tier 1 Environmental Impact Study (EIS) which evaluates ten alternatives by which the Cross Harbor Freight Program could improve freight movement across New York Harbor.

Public meetings will be held in January – February, with public comments due by February 27, 2015.

The Final EIS will be followed by a Record of Decision which will recommend:

“a preferred transportation mode or a combination of modes and alignments, with the appropriate level of detail for corridor-level decisions. The ROD will also outline measures that are intended to avoid, minimize, or mitigate adverse impacts from the selected Preferred Alternatives.” 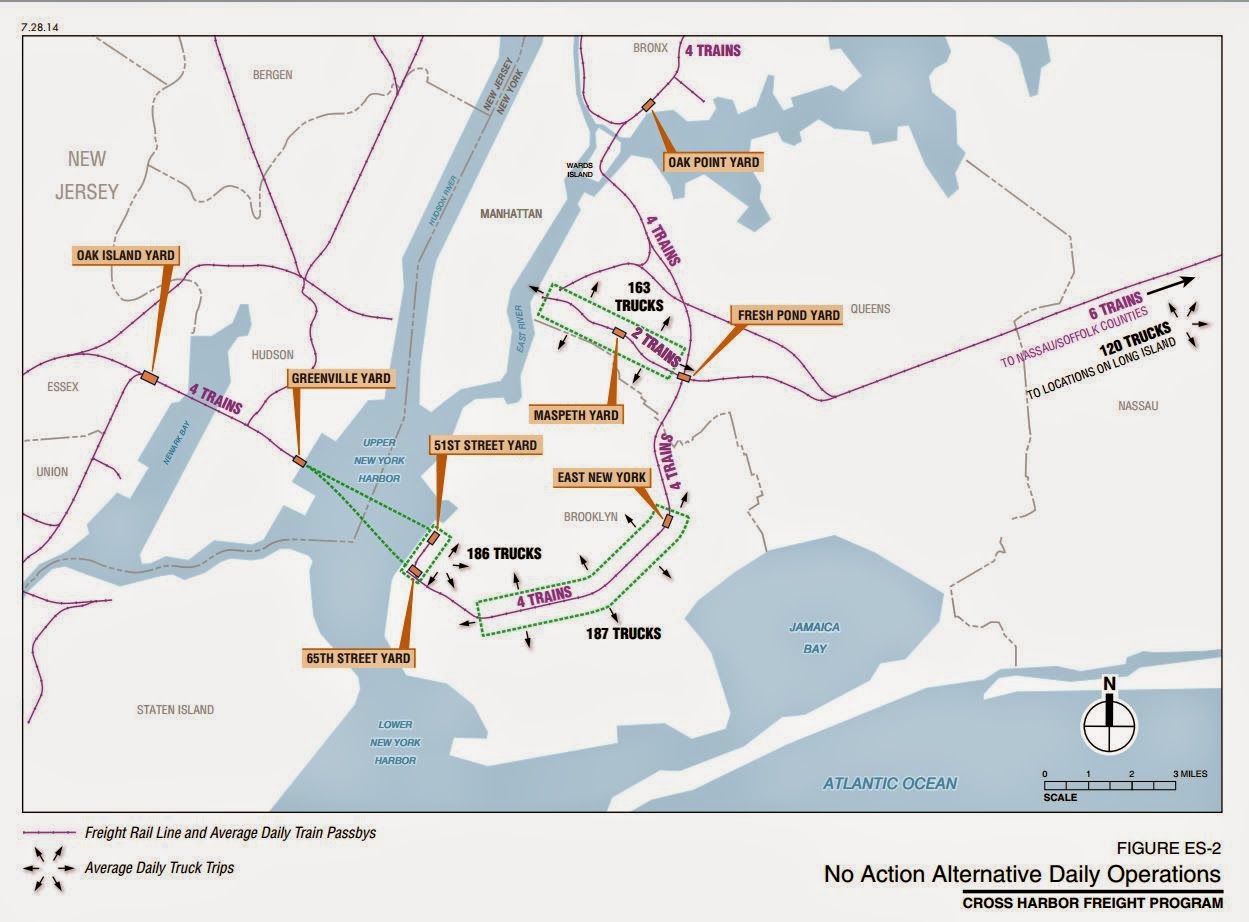 The study evaluates ten alternatives, including an expansion of existing rail float operations and construction of a railway tunnel.

Regarding air pollution, the study concludes that:

On the subject of Environmental Justice, the study concludes:

Subsequent Tier II analyses, as identified in each chapter of this EIS, will be required to pinpoint and confirm many of the potentially adverse impacts identified in Tier I of this EIS. These targeted analyses will be required to determine whether the impacts borne by environmental justice communities may be disproportionately high. At that time, avoidance measures or mitigation would be developed to reduce impacts on environmental justice communities, as appropriate.”

For more information, check out the New York Times article below, visit the Cross Harbor Freight Program web site from which you can view and download EIS chapters, or download the complete 7482 page study from the MFN resource library.

The potatoes about to cross New York Harbor had completed all but the last few miles of their journey by rail from Idaho. To get to their final destination, though, they had to be rolled onto a piece of transportation technology straight out of the 19th century: a slow barge to Brooklyn. 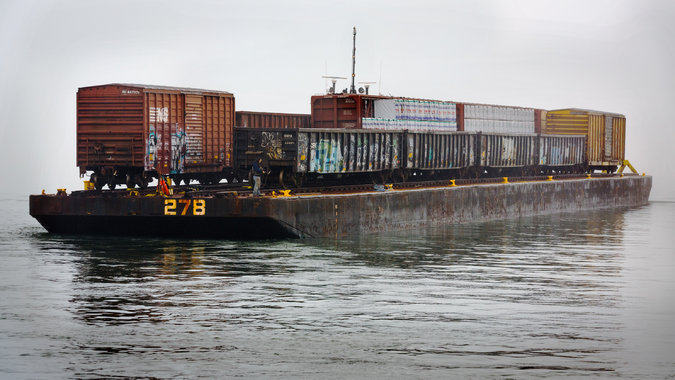 A key cog in the Port Authority’s float-bridge system, rail barge No. 278 carried 14 rail cars as it made the 40-minute trip across New York Harbor from Jersey City to Brooklyn on Wednesday.CreditRichard Perry/The New York Times

The potatoes’ voyage had begun with an order for 2,500 cases, each weighing 50 pounds, placed by Marc Greenberg, the head buyer for Circus Fruits, a produce wholesaler in Red Hook. To beat the high cost of cross-country trucking, Mr. Greenberg had chosen to have the order shipped by rail, a straightforward proposition if Brooklyn was not on an island.
The only way to get a rail car full of anything across either the harbor or the Hudson River within 125 miles of New York City is to load it onto a barge in New Jersey that is then pushed through the water by a tugboat moving at a speed of less than 10 miles per hour. “Everything’s an island here,” Mr. Greenberg said. “It’s cuckoo.”
That is where the rail-barge, or float-bridge, system comes in. It is making a gradual comeback as an alternative to the way the city receives almost all of its food, clothing and other necessities, which typically arrive in diesel-burning trucks.
To remove some of those trucks from the clogged streets and bridges, transportation officials are exploring ways to increase the number of rail cars crossing over to Brooklyn. On Thursday, the Port Authority of New York and New Jersey completed the first phase of that inquiry by releasing a draft study examining the potential environmental impacts of expanding the float bridge or building a tunnel under the harbor.
“Right now, the existing rail barge is a relatively small factor that we expect to grow,” said Patrick J. Foye, the executive director of the Port Authority, which plans to build a new float bridge at Greenville Yard in Jersey City. “It is a very small contributor to taking trucks off the highways,” he said, while adding that “every truck that’s taken off the highway is a positive.”
The cost of the five options for expanding the float bridge now under review range from about $100 million to $600 million, the Port Authority estimates. A four-mile-long, underwater tunnel that could accommodate freight trains, and possibly trucks as well, would cost far more — from $7 billion to as much as $11 billion, none of which has yet been arranged.
“Any type of rail tunnel is going to be a very expensive endeavor,” Mr. Foye said. Most of the money, he said, would most likely have to come from the federal government and private sources, rather than the Port Authority.
The steep cost has not deterred Representative Jerrold L. Nadler, a Democrat from Manhattan, who has been trying to build support for a cross-harbor rail tunnel for two decades. Mr. Nadler welcomed the Port Authority’s draft environmental impact statement as an important step toward his goal, noting that it had found that a tunnel for freight trains would divert 9.7 million tons of cargo from the region’s roadways each year. 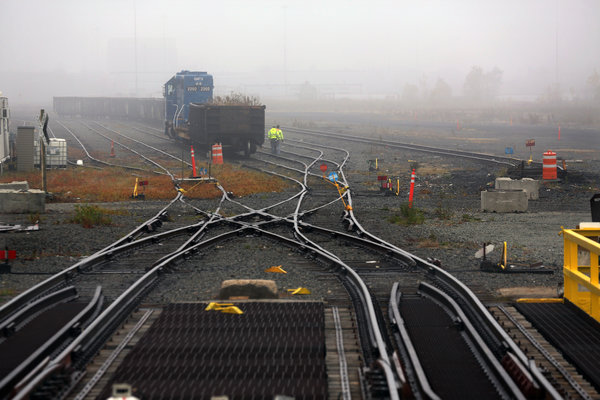 Once across the harbor in Brooklyn, the barges connect to the New York & Atlantic Railway, which runs freight trains on the Long Island Rail Road’s tracks, at the 65th Street rail yard. CreditRichard Perry/The New York Times

“It’s going to be a heavy lift for funding, but it’s one that I think is doable,” Mr. Nadler said in an interview on Wednesday. He had assembled, he said, a coalition of supporters that included his fellow Democrats, Senator Charles E. Schumer and Mayor Bill de Blasio, all of whom recognized that the federal government needed to invest more in how freight travels because “there’s not much room for additional tractor-trailers.”
Until a rail tunnel is built, New York is left with its float bridge, which Mr. Nadler said was “the epitome of 19th-century technology” before the Port Authority and the city’s Economic Development Corporation started improving it.
On the Brooklyn side of the harbor, the city has installed new links on the waterfront at 65th and 51st Streets to connect the barges with the tracks of the New York & Atlantic Railway, which runs freight trains on the Long Island Rail Road’s tracks. That is why the boxcar full of potatoes was accompanied on the rail barge on Wednesday morning by three cars stacked high with lumber bound for Home Depot stores on Long Island.
The barges, which are operated by the Port Authority’s New York New Jersey Rail subsidiary, carry an eclectic mix of cargo. They have delivered more than two dozen locomotives to the New York City subway system and have carried 190-foot steel girders for the new Willis Avenue Bridge spanning the Harlem River, said Donald B. Hutton, who runs the float bridge.
Mr. Hutton lines up the customers for the service, which he said runs two barges each way every weekday, but could add a third if demand were to increase. On Wednesday, several of the 14 rail cars loaded onto one of the barges on the New Jersey side were empty, on their way back to Sims Recycling’s yard in Sunset Park to be filled with scrap metal.
Mr. Hutton said the barges carry about 3,500 “revenue cars” across the harbor each year (the figure does not include those that travel empty). With the expansion the Port Authority has planned, he said, the capacity could increase to 23,000 rail cars per year — the equivalent of about 80,000 truckloads.
Shortly after the barge was loaded in a thick fog on Wednesday morning, its own ride arrived in the form of the tugboat Joyce D. Brown. The tug’s sole deckhand, David Reyes, a Staten Island resident, immediately hopped onto the barge and began tying off lines as the captain, Jim Brown, prepared to pivot the vessel away from the pontoon bridge and toward Brooklyn.
Mr. Reyes had the lonely task of riding aboard the barge without so much as a folding chair to sit on. Without pausing from his duties, he said he had been working on the barge for years without incident. The greatest hazard, he said, was the big wakes created by the Staten Island ferries that the barge had to cross.
The barge and tug disappeared into the fog. Less than 40 minutes later, they reappeared on a video monitor in Mr. Hutton’s office in the Greenville Yard. As soon as the barge settled into the bridge at 65th Street, an engine began pulling the cars onto the rails on land.
When Mr. Greenberg heard that his potatoes had made it to Brooklyn, he let out a little whoop. The trip had taken about 12 days — more than double the time it would have taken by truck — but he had saved his company nearly $3 on each case.
“The only way to get it here,” Mr. Greenberg said, “is to float it.”
Opinions expressed in this blog are those of the author, and do not necessarily represent the positions of the Moving Forward Network or its members. All errors are the responsibility of the author.